The new salary of the Egyptian player is 400 thousand per week .. Liverpool: “Salah Al-Khair Yarids”! 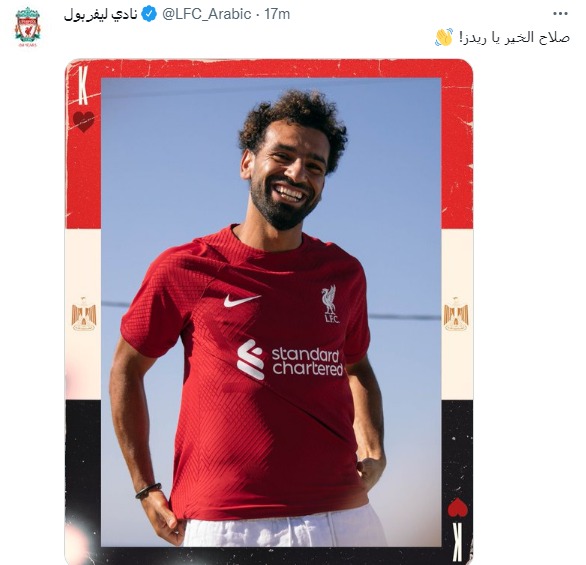 Liverpool, the English club, flirted with its Arab fans around the world, by publishing a picture of Egyptian star Mohamed Salah surrounded by the Egyptian flag through his account on Twitter, hours after renewing his contract with the Reds.

The Liverpool administration announced the renewal of Mohamed Salah’s contract yesterday after agreeing to his financial demands after a long period and negotiations over the main dispute over the value of the new salary, as the management of the English team was subject to the conditions of the Egyptian international and the renewal of his contract to the summer of 2025.

And the official account of the English club Liverpool on Twitter, “in Arabic,” published a picture of Mohamed Salah surrounded by the Egyptian flag and with the comment “Salah Al-Khair Yareds.”

Today, Saturday, English press reports revealed a new surprise about the salary of Egyptian star Mohamed Salah after officially renewing his contract with Liverpool, stressing that his new salary is 400,000 pounds per week, which is the highest salary in the English Premier League and the fourth among football players in the world.

And the British newspaper, the Daily Mail, confirmed that Mohamed Salah’s new salary puts him at the top of the highest salaries in the English Premier League, after he was outside the top ten and was receiving only 200,000 pounds in his old contract.