The plane carrying Queen Elizabeth’s coffin has been most tracked 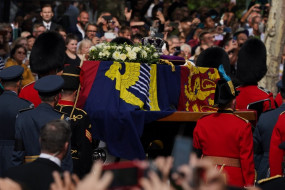 Digital Desk, London. A plane carrying the coffin of Queen Elizabeth II has broken the record for the most tracked flight ever.

About five million people have been tracked online since the late Queen was flown from Edinburgh to London on Tuesday, CNN reported, quoting website Flightradar24.

The numbers came from two sources – 4.79 million people who tracked flight journeys on Flightradar24’s website and mobile app, as well as 2,96,000 people on YouTube.

CNN quoted the website as saying that his plane’s trip to Taipei was tracked by about 2.9 million people. The Royal Air Force plane carrying the Queen spent an hour and 12 minutes in flight.

It landed at RAF Northolt, a military station about six miles from Heathrow Airport in London. The Queen’s coffin was taken from Northolt to Buckingham Palace. On Wednesday, the coffin was moved to Westminster Hall of Parliament, CNN reports.