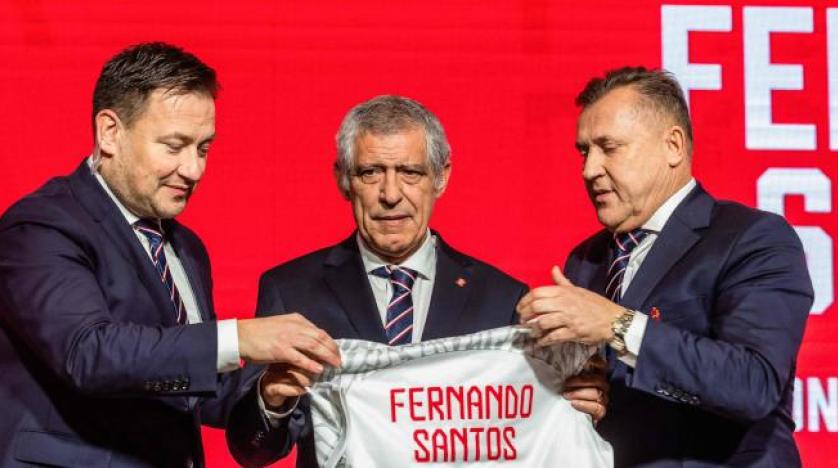 The Polish Football Association officially announced on Tuesday the appointment of Portuguese Fernando Santos as coach of the national team.
“As of today I am Polish, I am one of you,” said the former Portugal coach during a press conference in the capital, Warsaw. “It is an honor for me to complete my work as a coach here.”
“I am convinced that we will work hard to give the Poles a lot of joy. I am sure that we will succeed,” he added.
In one of his first interviews with the Polish media, Santos told the Interia news site that his main focus is on winning.
The former Greek national team coach (2010-2014) confirmed that he intends to move to Warsaw and get to know the national team.
“I don’t want to be the guy you only see during matches and on special occasions,” he said. “I want to get to know the people of Polish football and I want them to get to know me.”
For his part, Federation President Cesare Kulesha confirmed, “The choice was difficult, but our choice fell on the best. The first goal is to qualify for the European Cup” 2024 in Germany.
Santos, 68, will succeed Czeslaw Mikhniewicz, who was sacked last month after Poland’s exit from the World Cup final in Qatar.
Poland finished the first round in second place in its third group, by defeating Saudi Arabia, drawing with Mexico, and losing to Argentina, which later crowned the title.
Poland, which reached the final price for the first time in 36 years, lost to runner-up France 1-3.
Mikhniević was heavily criticized by the local media for his tactical methods during the tournament, and the local federation criticized him for his “lack of vision about the performance and future of the national team.”
On the other hand, Santos left his post after Portugal was eliminated in the quarter-finals of the World Cup by Morocco, 0-1.
Santos took over the technical management of his country’s national team in September 2014 and led it to crowning its first major title in the 2016 European Cup, then won the European Nations League in 2019.
However, his time in office saw him exit the last eight at the 2018 World Cup in Russia and the European Cup held in the summer of 2021.

Determining the dates of the cup quarter-final matches

Determining the dates of the cup quarter-final matches

Andy & Lucas: “We are the same, we keep our essence intact”