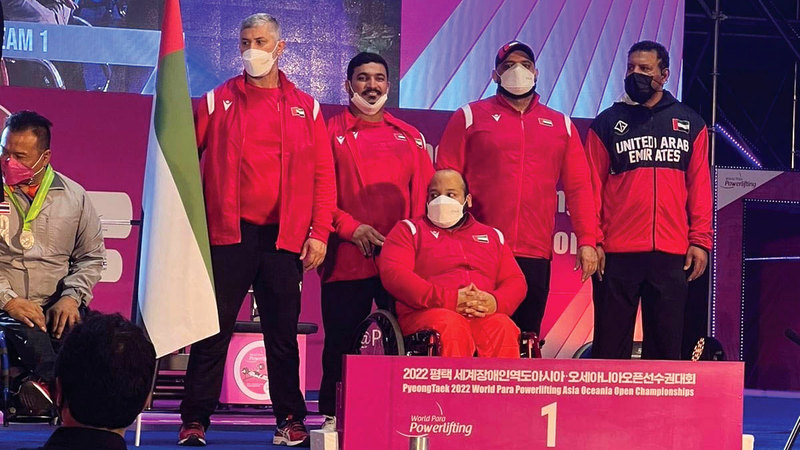 The national men’s powerlifting team won the gold medal in the Asian and Oceania Championships, which concluded yesterday, in South Korea.

The team’s champions outperformed the rest of the participants in the tournament, which witnessed the participation of 231 male and female players from 19 countries from the continents of Asia and Oceania, to score a new achievement for the sport of powerlifting for people of determination.

The team was represented in the teams competition by: Ahmed Khamis, Abdullah Al-Naqbi, and Adel Hassan, and the trio managed to achieve the new achievement that is added to the achievements of the People of Determination.

The team’s administrative supervisor, Khalifa Al Balushi, expressed his deep gratitude for the distinguished technical level provided by the players throughout the tournament, which resulted in many colorful medals.

Al Balushi said: “What the players have achieved is the result of good preparation for the tournament, technically and physically, and the great support of the rational leadership, which resulted in achieving the goals of participating in the tournament.”

Paralympic champion Muhammad Khamis expressed his happiness with the strong participation of the people of the UAE and his colleagues in the tournament, especially the people of determination, who were able to return the favor to the country.

The team represented in the team competition were: Ahmed Khamis, Abdullah Al-Naqbi and Adel Hassan.