The rich will be: how the car of the “post-abundance” era drives 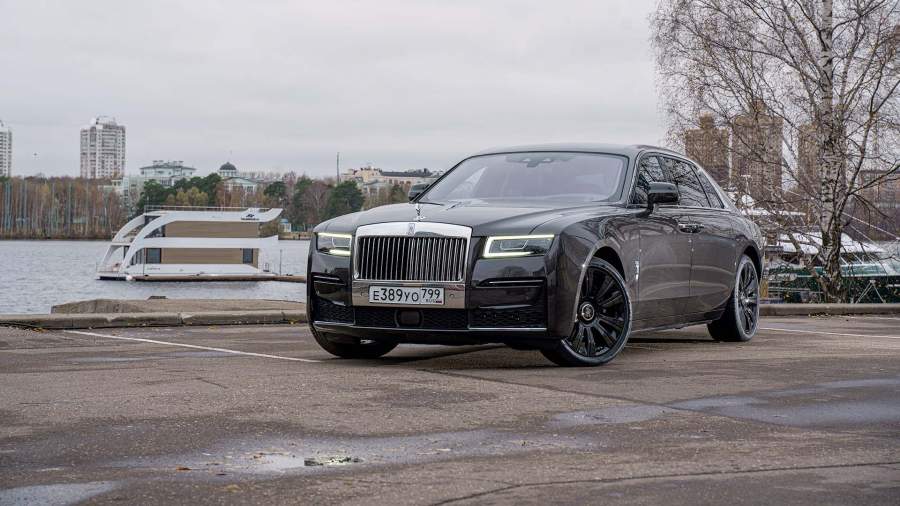 The appearance of the super-expensive British brand has always tended towards minimalism and was extremely reluctant to change it. The Ghost, especially the elongated one, is very similar to the flagship Phantom. Meanwhile, this is the most affordable model of the British brand. Is it possible to consider it a real Rolls-Royce and where this line lies?

Consistent with the era

When Rolls-Royce invented the name “Post Opulence” for the style of the new Ghost, there was not yet a pandemic, nor everything associated with it: masks, quarantines, social distancing, QR codes, car shortages. But it turned out that both the term and Rolls-Royce’s approach to car production are the best fit for the times.

One premiere is layered on another, eyes run up from the abundance of new products, but factories keep getting up because of the lack of microchips, there is a queue even for the most common models. The abundance in the car market has come to an end, and dealers are now doing what Rolls-Royce has become adept at over the decades: they sell hard-to-find goods at a high price. But Rolls has a special kind of product. Therefore, the actions of imitators cause natural irritation.

The excitement of buyers is understandable: the value of any car has increased, now it is perceived as a safe haven, a fortress on wheels. Here you have both social distancing and the ability to move around without restrictions. And in conditions when mass events are now and then canceled, it is also a mobile concert hall.

Rolls-Royce Ghost is not just a fortress, it is a citadel, a monolith with a minimum of joints between the panels. The C-pillar flows smoothly into the roof, without seams and gutters. The Spirit of Ecstasy figurine was threaded through a hole in the giant hood (it used to be on top of the grille). Total minus one noticeable joint. 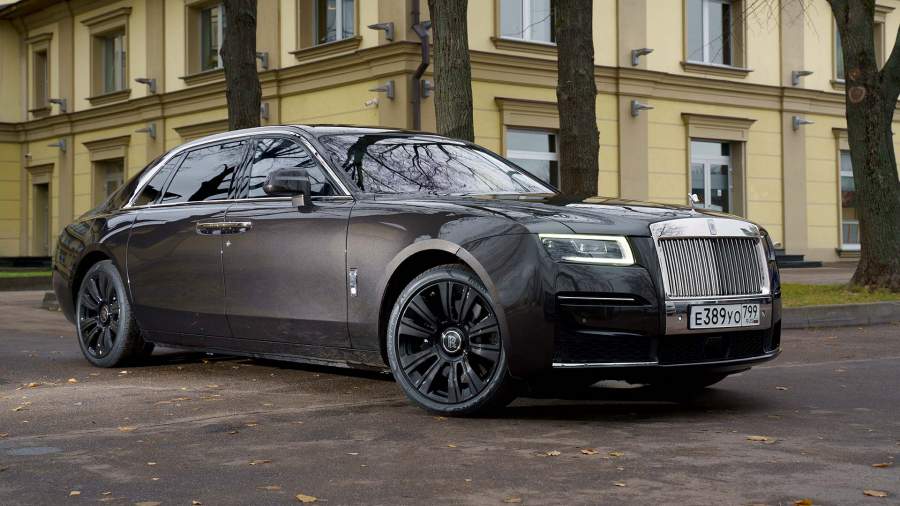 The V12 engine paired with an 8-speed automatic transmission accelerates the car to 100 km / h in 4.8 seconds. The maximum speed is limited at around 250 km / h

Ghost repeats the style of the older Phantom, but the interpretation of the image is different: the lines are sharper, the silhouette is faster, and the lanterns are generally unusual for Rolls-Royce designers. The length of the Ghost Extended is more mesmerizing than the speeding fast train. In theory, this is the most affordable and mainstream Rolls-Royce car, but made without compromise. If the previous generation Ghost was created on the BMW platform, then the new one – on the same aluminum architecture as the Phantom and Cullinan.

A thick door with a massive handle looks like a safe. The back also hides an umbrella at the end. You swing it open and you feel the weight and momentum. Sitting inside, just press a key and the flap slams shut with the help of a servo. Welcome to the best of self-isolation. It’s like being in a sealed capsule: street noises subside at once, and an advanced air purification system isolates from the plebeian odors of the outside world.

Inside, the Ghost differs little from the flagship: natural wood, cold metal, thick leather of the highest manufacture, rugs with thick long pile. All the old-fashioned attributes of the brand are in place: a steering wheel with a round hub, exhaust air duct controls and a climate control unit with leather-trimmed handles and specially shaped sliders. At the same time, the Ghost does not hide the center display and infotainment control unit. 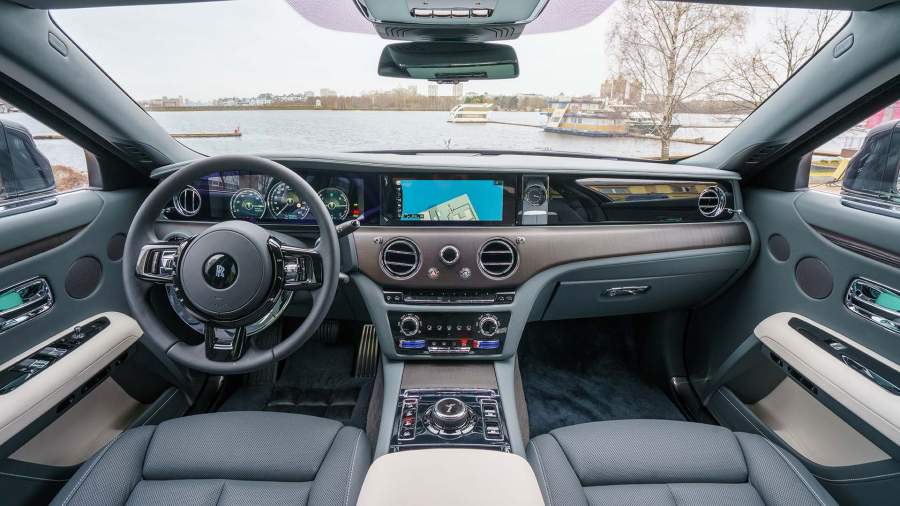 The interior is typically Rolls-style, expensive materials and retro charm

The glossy black bezel with glowing stars and the Ghost wordmark could also be mistaken for a display. But this is a whole work of art: one and a half hundred LEDs, optical fibers, three layers of different varnish. The inscription and the star cluster should fade away without a trace and light up evenly It was easier to install an additional display, but the British firm is not looking for easy ways and are ready to spend two whole years on the development of a small and seemingly insignificant detail.

The gray-brown lump dissolves in the early twilight and does not attract attention. Even the illumination of the radiator grille, majestic, like the colonnade of the Bolshoi Theater, does not blind the eyes; for this, the chrome on the side parts of the lamellas was made matte. But anyone can immediately see that in front of him is a very difficult car. Therefore, the invisible Ghost creates the notorious social distance around itself in the stream. 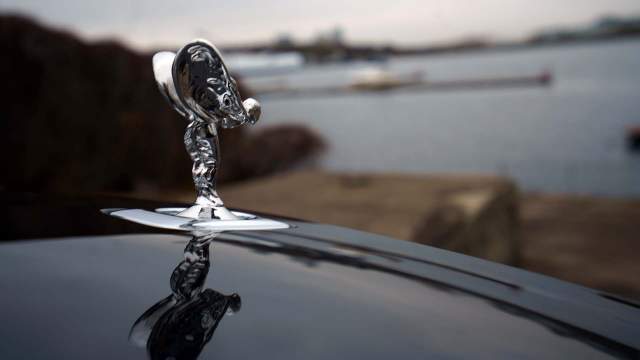 If desired, the Spirit of Ecstasy figurine can be hidden through the touchscreen 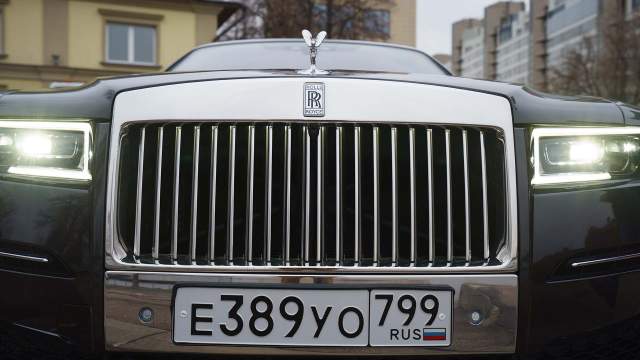 The radiator grille is illuminated 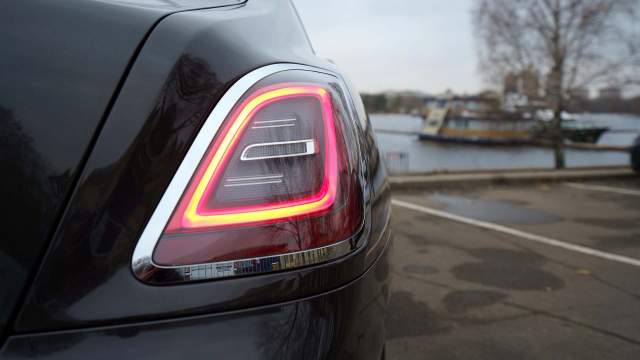 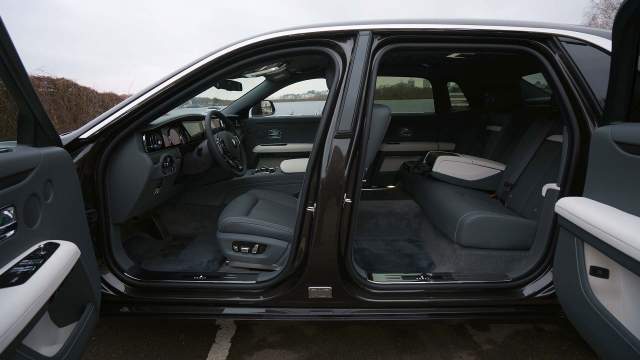 Doors are equipped with servo drives 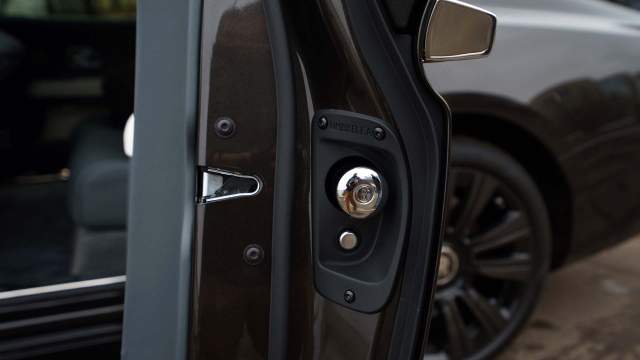 An umbrella is hidden at the end of the back door 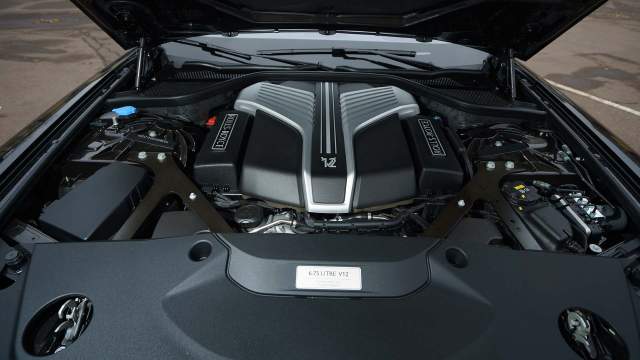 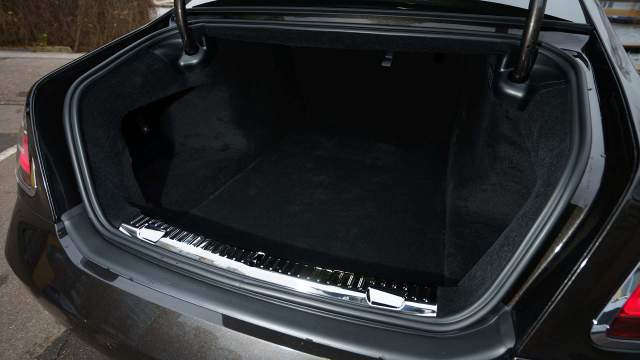 This is probably how those who have moved to live on a houseboat feel: it’s like an island, there is water around, but the lights of the megalopolis are here, very close. The difference is that above the head of the passengers of the “ghost” there are brightly burning stars that you rarely see in the city. The own starry sky on the ceiling is another laborious detail. It takes at least 9 hours to make it by the hands of two craftsmen, if the task is simple. But the customer may, for example, want to be depicted the location of the stars on the date of birth.

Ghost is the most “driver” in the brand’s lineup, equally suitable for both the driver and the passenger. The driving position is lower and tighter than the Phantom. For ideal weight distribution, the power unit is shifted behind the front axle. The four-wheel drive grips confidently even on wet asphalt. Acceleration to “hundreds” may take more than the passport 4.8 s, but still impressive. Ghost is somewhat reminiscent of an electric car – the set of speed is very quiet and only the distant rumble of the V12 engine (571 hp and 850 Nm) interferes with the complete resemblance. The mighty torque is available all at once. The hand of the dial showing the power reserve wiggles only slightly, demonstrating that the power is with a margin. 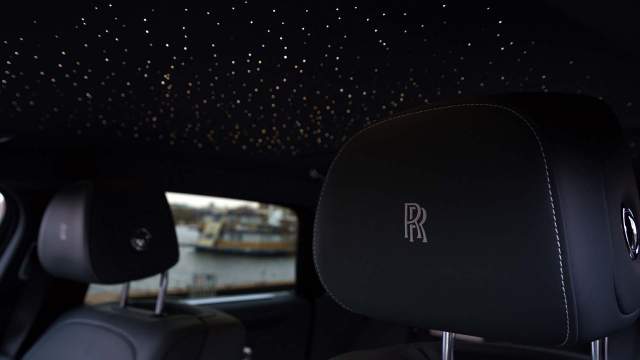 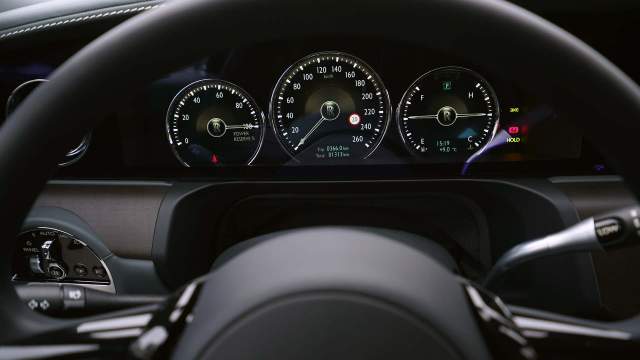 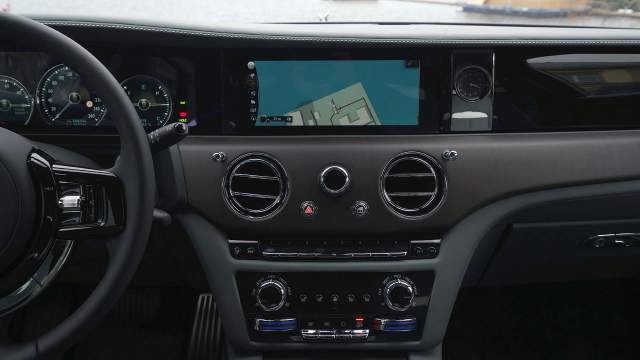 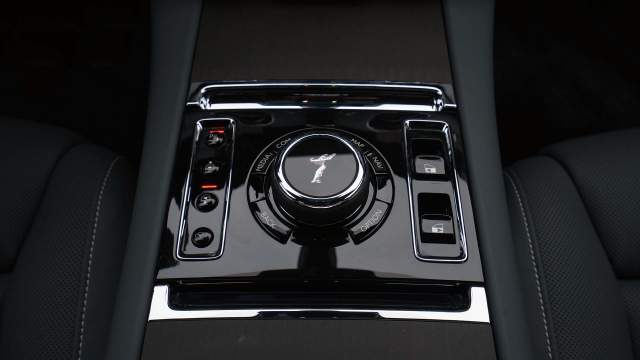 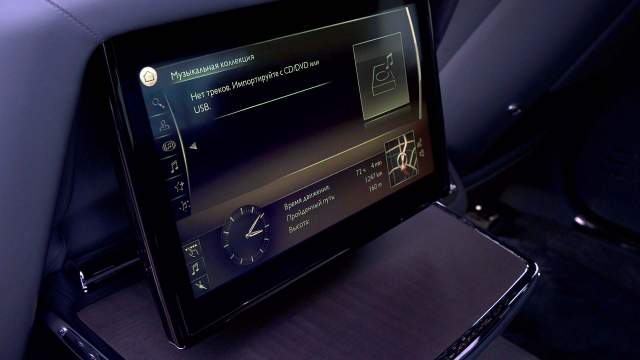 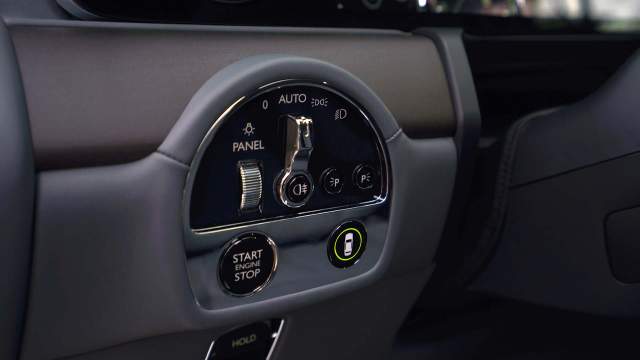 The light control unit is also in retro style 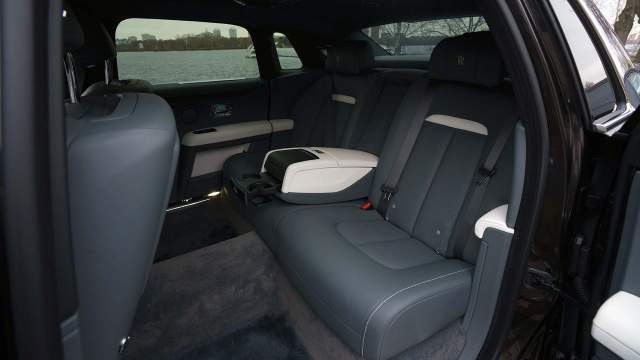 Rear seats with a margin. The sofa, despite the folding armrest, is only intended for two passengers

Of the special modes, there is only “lowered”, which is turned on by a tiny, inconspicuous button and allows you to better hear the sound of the motor. Not enough dynamics – it doesn’t matter. You can buy another Ghost, but the Black Badge series is more powerful (600 hp and 900 Nm) and with more driver settings. Surcharge – some 8.5 million rubles. For ordinary customers, brands are not the biggest bucks.

And all around is silence

In general, this is a quiet car. Quiet, as the model name suggests. After all, not only money loves silence, but also its owners. This is part of the “Formula of Serenity”, also invented by the British brand. No wonder the creators of Ghost distributed 100 kg of noise-insulating materials to the body cavities and even polished the inner parts of the air ducts so that they do not hiss. The result is an excellent concert venue – the Bespoke Audio audio system with an unusual arrangement of subwoofers – in the doorsteps – sounds like no other car.

Despite the total sound cancellation and the cunning Planar suspension, which can read the terrain with the help of cameras and change the stiffness, there is no feeling of flying on a cloud. Feeling the road, precise and linear steering response, confident brakes – driving this car is a real pleasure, even if you don’t have the money to buy it. 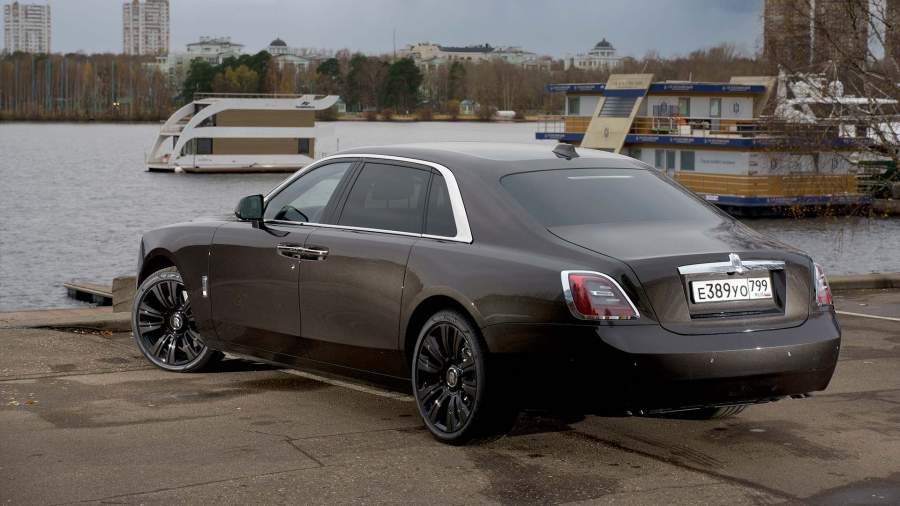 Prices for Ghost start at 27.2 million rubles. The test car in the Extended version with all the options pulled by 33.5 million rubles

Thanks to the rear steering wheels, the huge length of more than 5.7 m, the car is surprisingly very maneuverable.

The Ghost would have been even more maneuverable as standard, but rear passengers won’t like the reduced legroom. Well, there are no ideally universal things. Even in the case of Rolls-Royce. And you can’t do without compromise. The suspension with video cameras and cunning dampers is not able to smooth out large bumps – the wheels are still rather big. And the sophisticated steering and chassis settings – fully compensate for the considerable weight and dimensions of the car. The motor is probably the most indisputable thing about this car.

The Ghost is the most dynamic car in the brand’s model range and, thanks to its all-wheel drive, is all-weather. And this is definitely a real Rolls-Royce. That is why it is difficult to talk about it as the most accessible or initial model. He’s just different, not Cullinan or Phantom.

The editors would like to thank Houseboat.ru for help in organizing shooting