WorldThe Saudi Cabinet calls on the international community to deprive the Houthis...
World 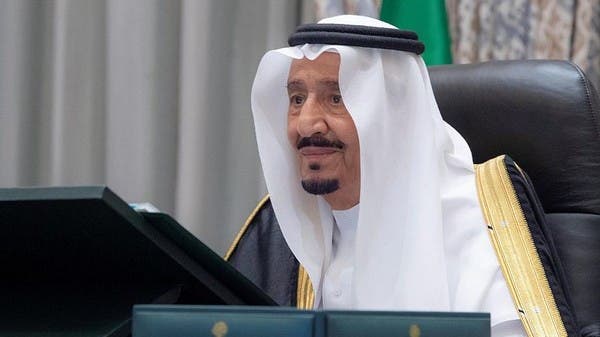 The Saudi Cabinet called on the international community to deprive the Houthis of the source of their weapons.

The Saudi Cabinet said that the Houthi militia’s cross-border actions undermine efforts to reach a solution in Yemen.

The Council affirmed that Saudi Arabia continues to work with the United Nations to bring peace to Yemen.

The Council of Ministers held its session today – via video communication – under the chairmanship of the Custodian of the Two Holy Mosques, King Salman bin Abdulaziz Al Saud, Prime Minister.

During the session, the Council of Ministers was briefed on the content of the meetings and meetings that took place during the past days, aimed at strengthening and developing relations with many brotherly and friendly countries in various fields, and continuing to enhance the Kingdom’s position and its regional and international role.

The Council reviewed a number of issues and developments in the region and the world, reiterating the continuation of work with the United Nations to bring peace to Yemen, which is a priority for the Kingdom, while preserving its full right to defend its security and its citizens in accordance with international humanitarian law and its customary rules.

In his statement to the Saudi Press Agency, the designated Minister of Information, Dr. Majid bin Abdullah Al-Qasabi, said that the cabinet stressed the contents of the message of the Kingdom’s permanent delegation to the United Nations to the Security Council, following the targeting of civilians by the Iranian-backed terrorist Houthi militias in the eastern region, Jizan and Najran. , from calling on the international community to assume its responsibility towards these militias and their arms supplier, and depriving them of the resources that fund their cross-border hostilities, which undermine international efforts to reach a comprehensive political solution in Yemen, and threaten international peace and security.

The Council touched on the Kingdom’s participation in the work of the 156th session of the Council of the League of Arab States, and the condemnation and denunciation of the Israeli attacks and measures in the city of Jerusalem, expressed by the meetings held on the sidelines, stressing the importance of imposing the necessary mechanisms for rapid and comprehensive inspection of nuclear sites in Iran, and working to Strengthening joint Arab coordination to address any interference in the internal affairs of Arab countries.

And he indicated that the Council of Ministers followed the developments of the Corona pandemic at the local and international levels, and the statistics and related indicators recorded, of the continuation of the decrease in the curve of injuries, and the increase in the number of doses given of the anti-vaccine to nearly (40 million), stressing the importance of everyone’s adherence to preventive measures and completing immunization. Two doses to protect against and reduce complications of the virus.

The council concluded the following:
First:

Authorizing His Royal Highness the Minister of Energy – or his representative – to discuss with the Japanese side two draft memoranda of cooperation between the Ministry of Energy in the Kingdom of Saudi Arabia and the Ministry of Economy, Trade and Industry in Japan in the areas of hydrogen, carbon recycling and the circular economy of carbon, and sign them, and then raise The two final signed copies, to complete the statutory procedures.

Authorizing the Chairman of the Board of Directors of the Education and Training Evaluation Authority – or his representative – to discuss with the Egyptian side a draft memorandum of cooperation between the Education and Training Evaluation Authority in the Kingdom of Saudi Arabia and the National Authority for Quality Assurance of Education and Accreditation in the Arab Republic of Egypt in the field of quality and accreditation, and to sign it, and from Then upload the final signed copy, to complete the legal procedures.

Approval of the establishment of a body called the “General Authority for Defense Development”, which enjoys legal personality and financial and administrative independence, and is linked to the Prime Minister, and is concerned with defining the objectives of research, development and innovation activities related to the fields of technology and defense systems and setting its policies and strategies.

Approving the final account of the Electricity and Cogeneration Regulatory Authority (formerly) for a previous fiscal year.

Seventh:
The Ministry of Interior, the Ministry of Municipal and Rural Affairs and Housing, and the Saudi Data and Artificial Intelligence Authority, technical linkage between them, in order to enable them to exchange information and data related to neglected or damaged vehicles – located in public squares, parking lots, streets or roads – and their owners, and to verify that there are no Security restrictions on it before taking any action regarding these vehicles.

Approval of the anti-begging system.

Approval of the guiding guide to propose the enactment of the provisions of the administrative violation and its penalty.

The General Authority of Ports – in agreement with the Public Investment Fund – to undertake marine infrastructure works projects to develop the cruise ship sector in the Kingdom.

Approval of promotions to the fifteenth and fourteenth ranks, as follows:

– Eng. Mazen bin Adel bin Ibrahim Bakharji is promoted to the position of Under-Secretary for Reconstruction and Projects, rank (15) in the Eastern Province Municipality.

– Saad bin Mishref bin Muhammad Al-Omari is promoted to the position of (Director General of Law), rank (14) at the Ministry of Interior.

– Khalid bin Suleiman bin Muhammad Al Hadi is promoted to the position of (Assistant Undersecretary for Rights), rank (14) in the Emirate of Asir region.

– Rashid bin Abdullah bin Saad Al-Qahtani is promoted to the position of (security advisor) at rank (14) in the Emirate of Al-Madinah Al-Munawwarah Region.

– Hussain bin Ahmed bin Saleh Bayhya is promoted to the position of Director General of Administrative and Financial Affairs, rank (14) in the Jeddah Municipality.

– Eng. Hamid bin Abdul Hamid bin Siddiq Al-Juhani is promoted to the position of (mayor) at rank (14) in the municipality of Yanbu.

Previous articleSai Dharam Tej: False propaganda against Asif and Farhan who saved Sai Dharam .. Young people feel that they are not true
Next articleThe CEC reacted to the information about the offshores of the members of the Communist Party of the Russian Federation