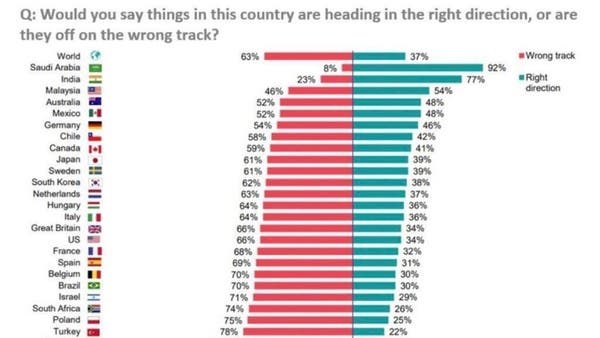 With Vision 2030 entering its sixth year, the Kingdom of Saudi Arabia recorded the highest levels of confidence in its economic trends, surpassing many of the major industrialized countries. Such as the United States of America, India, Germany, Japan, Britain and France, according to a survey conducted by the global research company Ipsos between March 25 and April 3 of this year 2022.

The results of Ipsos, which is the third largest research agency in the world, confirm the confidence of the Saudis in the Vision 2030 project, and the structural reforms it has carried out in the structure of the Saudi economy, the labor market, investment systems, and the creation and enactment of legislation supporting all of this, supported by a strong war against corruption and drying up its sources, which led To diversify sources of income, develop investment opportunities, and create job opportunities for male and female citizens, which was reflected in enhancing the quality of life for the citizens of the Kingdom of Saudi Arabia, its residents, and its visitors.

at the forefront of countries

The Kingdom of Saudi Arabia topped the countries included in the Ipsos Index, which focuses on many important social and political issues in 27 countries around the world. By 35%, more than 18 points ahead of its closest competitor, India, which came second in terms of ranking.

By comparing the 27 countries in the five most important topics (inflation, poverty and social inequality, unemployment, crimes and violence, the economy and political corruption), the confidence of Saudi citizens in government procedures and systems was clearly reflected, as they expressed the lowest percentage of concern regarding inflation with only 10%, while The rate of general global concern about this problem was 32%, as was the case with the issue of unemployment, where the Saudis expressed the lowest percentage of concern about this file at only 15%, as the lowest percentage among all countries included in the global research company Ipsos index, with a difference of 16 points from the global average that It is estimated at 31%.

The results of the growing confidence in the Kingdom’s economic policies are an extension of previous results achieved during the past two years in a row, in the Edelman Confidence Index, where last year 2021 ranked first in the index covering 28 countries around the world, where levels of confidence in the performance of the Kingdom’s government increased from 78% in January 2020 to 82% in January 2021, adding to its balance 4 percentage points that qualified it to be at the forefront of the countries included in the index as the highest government in the world confident in its performance.