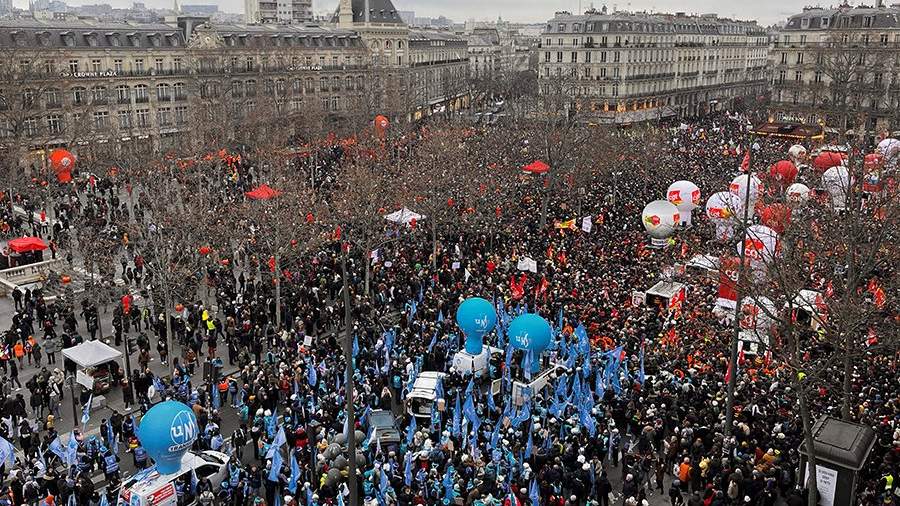 The second nationwide demonstration against raising the retirement age in France will take place on 31 January. This was announced on January 19 by the BFMTV channel with reference to the trade union of the General Confederation of Labor (CGT).

“In continuation of today’s day of demonstrations against pension reform, the next protest will take place on January 31st. This date was agreed upon by eight leading trade unions in France: CFDT, CGT, FO, CFE-CGC, CFTC, Unsa, Solidaires, FSU,” the TV channel reported.

According to the trade union, the rally in Paris had 400,000 participants, and a total of 2 million people protested in 200 rallies in the country.

Earlier in the day, Le Figaro newspaper reported that thousands took to the streets of France in protests against the new pension reform. According to the publication, at least 36 thousand demonstrators marched in Toulouse, 26 thousand people are on strike in Marseille, 25 thousand in Nantes, 15 thousand in Montpellier and in other cities of the country. Between 200,000 and 400,000 protesters are expected in Paris. There are calls to abolish the “unjust reform”.

The BFM TV channel, citing police data, reported that about 1.12 million people participated in demonstrations against raising the retirement age. Of these, 80 thousand took to the streets of Paris. At the same time, according to the General Confederation of Labor, the number of protesters was about 2 million people.

The upcoming strikes became known as early as January 17th. Then the National Railway Company (SNCF) warned of an almost complete cessation of traffic on a number of routes due to protests from the national trade union movement.

On January 11, about a thousand people demonstrated against the pension reform in Perpignan, France. Residents of the city took to the streets with burning torches in their hands.

French Prime Minister Elisabeth Born on January 10 introduced a reform according to which the retirement age in the country will rise from 62 to 64 years. According to her project, from September 1, 2023, the retirement period will gradually increase and reach 64 years in 2030.