The secret of the painting that Khaled Al-Faisal gave to Russia.. The painter reveals 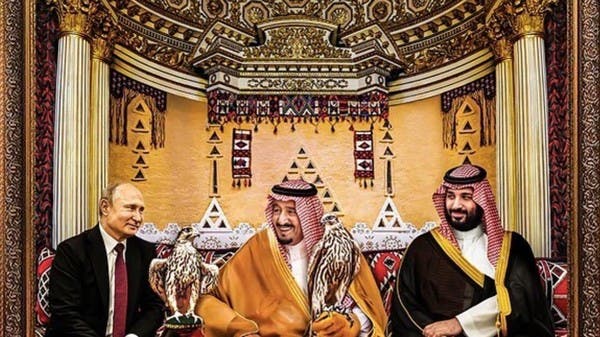 Adviser to the Custodian of the Two Holy Mosques, Prince of Makkah Al-Mukarramah Region, Prince Khaled Al-Faisal, presented the Kingdom’s gift to Russia on the occasion of the 95th anniversary of Saudi-Russian relations.

The gift is a painting entitled “History and Future”, which was received by the Acting President of the Republic of Tatarstan.

This came on the sidelines of the meeting of the Strategic Vision Group “Russia and the Islamic World”, which is being held this year in Jeddah, under the slogan “Dialogue and Prospects for Cooperation”, under the auspices of the Custodian of the Two Holy Mosques King Salman bin Abdulaziz.

During Khaled Al-Faisal’s dedication to the painting

The painting belongs to the Saudi artist “Nabila Abu Al-Jadayel”, where the painting was painted on silk and entitled “History and Future” on the occasion of the 95th anniversary of the relations between the two countries.

Abu Al-Jadayel said: “I was honored to greet Prince Khaled Al-Faisal when he handed over to the President of the Republic of Tatarstan my painting on silk entitled (History and Future), and I was honored by the Saudi Ministry of Foreign Affairs choosing my painting and gifting it at this conference, and presenting it as a gift by Prince Khaled Al-Faisal as a gift to the Russian Federation.”

The painting that Saudi Arabia gave to Russia

She also indicated that she chose the presence of hawks because it is a common culture between Saudi Arabia and Russia.

The secret of choice

As for her choice of designing the Majlis, it is a combination of King Salman Majlis at Al-Auja Palace in Diriyah, and the Throne Room in the Winter Palace in St. Petersburg in Russia.

It is noteworthy that the artist, Nabila Abuljadayel, studied art at Northeastern University and Harvard University in Boston, USA.