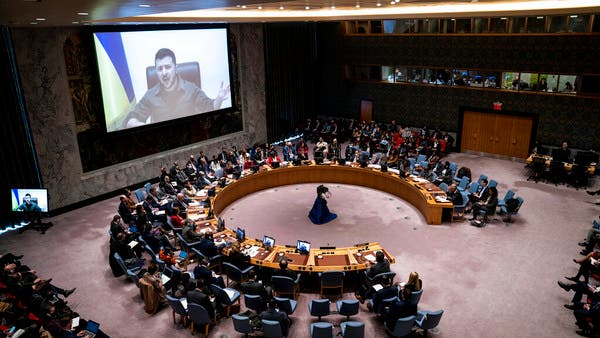 On Friday, the UN Security Council issued a unanimous statement affirming its “strong support” for UN Secretary-General Antonio Guterres “in his pursuit of a peaceful solution” to Russia’s war in Ukraine, according to diplomatic sources.

The statement prepared by Norway and Mexico, and seen by AFP, does not go as far as supporting Guterres’ mediation, as stipulated a first version of the text that has been negotiated since Thursday.

The approved statement reflects a unified position for the Security Council for the first time since Russia’s attack on Ukraine on February 24.

Shortly after the outbreak of the war, Russia vetoed a resolution condemning it and demanding that it withdraw its army to Russian lands.

The very brief text stated that “the Security Council expresses its deep concern in connection with the maintenance of peace and security in Ukraine.”

In their statement, the 15 members of the Council also reminded that “all Member States have undertaken, under the Charter of the United Nations, to settle their international differences by peaceful means.”

Finally, the statement asked the Secretary-General of the international organization to submit a report after the statement was adopted.

The United Nations, whose mission is to ensure peace in the world, has undertaken no mission as a potential mediator for a peaceful settlement of the conflict in Ukraine. Its intervention in this country and its neighboring countries is limited to the humanitarian aspect.

A building fire after the bombing in Kyiv (Reuters)

On the ground, officials of the Ukrainian National Security Council warned the population, today, Friday, of the increased severity of the bombing on Sunday and Monday, coinciding with the Victory Day celebrations in Russia.

A Facebook post from the Anti-Disinformation Center of Ukraine’s National Security and Defense Council urged citizens not to ignore the air raid sirens.

“Because the Russian forces cannot boast of any real achievements on the front on D-Day, the massive bombing of Ukrainian cities on that day becomes more and more dangerous,” the post said.

Separately, on Friday, Kyiv Mayor Vitali Klitschko said that the authorities would not extend the curfew in Kyiv, but that street patrols would be redeployed.

Moscow celebrates the day of the Soviet victory over Nazi Germany in World War II on May 9 of each year.