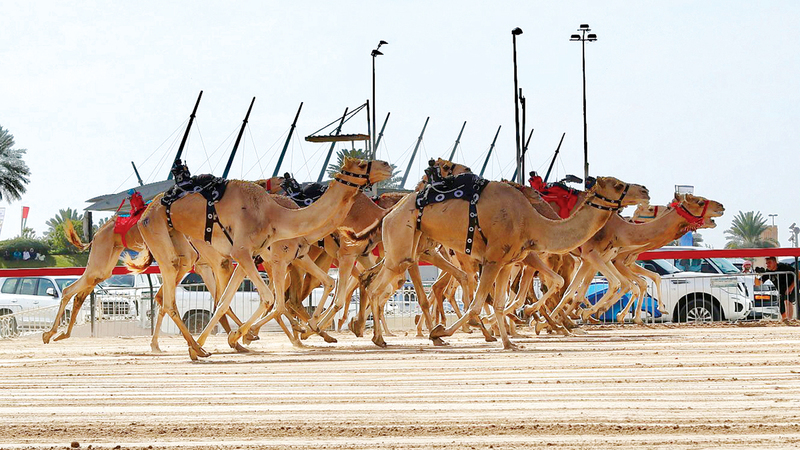 The Storm Camel and Presidency Camel institutions shared the titles of the Dubai Crown Prince Camel Festival 2023 on the closing day of the camel participations of Their Highnesses Sheikhs, by holding 13 rounds in the year of Al-Hol and Zamoul for a distance of eight kilometers, while the festival concludes today with the holding of tribal camel competitions.

The Storm Camel slogan continued its brilliance through the main runs and succeeded in winning the lead in the main round of Al-Hawl through “Al-Shahiniya”, which was led by Ghiath Al-Hilali to the lead with a time of 12:14:4 minutes, while the Presidency Camel dominated the top of the main challenge to Al-Zamoul after the implicit Hamad Saad presented it. Qazla Al-Ahbabi “Shaheen” won the first place with a time of 12:46:2 minutes. And the slogan of the camel of the presidency shone in the third half of the year, through which Muhammad Zaitoun Al Muhairi led the “Al-Shahiniya” to the lead with a time of 12:17:7 minutes. It’s 12:27:6 minutes.

The distinguished implicit of the presidential camel, Muhammad Zaytoun Al Muhairi, led the “Shahiniya” to the top of the main round of the year with a time of 12:31:3 minutes. .

The same conspirator returned to win the third round of the year through “Al-Shahiniya”, which ran the race distance in a time of 12:24:6 minutes. 32:7 minutes, and the best time in all runs was 12:23:3 minutes, which was achieved by “Al-Kayda” for Hajn Seih Al-Salam under the leadership of Mutammar Saif bin Omair Al-Amimi, who won the lead in the eighth round of Al-Hawl.