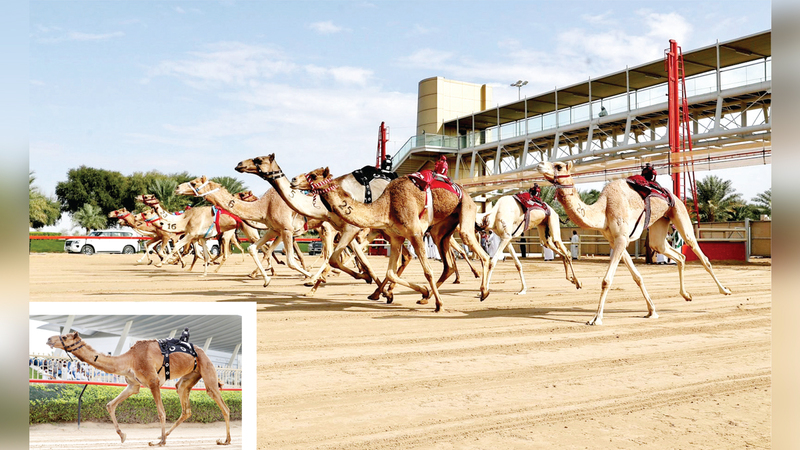 The Storm Camel Foundation continued its brilliance at the Dubai Crown Prince Camel Festival 2023, through the challenges of the folds of the camels of Their Highnesses Sheikhs, which were held over 13 runs for a distance of eight kilometers.

And the slogan of the camel of the storm, owned by His Highness Sheikh Hamdan bin Mohammed bin Rashid Al Maktoum, Crown Prince of Dubai, succeeded in obtaining the top of the main run of the virgin folds, after the distinguished pronoun Ghiath Al-Hilali presented “Al-Shahiniya” on the top with a time of 12:09:2 minutes, while gifting Al-Fayez, led by Faran bin Qurei Al-Marri, Hajn Al-Shahaniya won the title of the main race for Al-Jaadan after reaching the finish line at a time of 12:17:1 minutes.

The camel of Zabeel shone through the third round of the virgin folds, through which Rashid Muhammad Murooshid led the “Al-Shahiniya” to the fore with a time of 12:13:4 minutes, and the camel of the Presidency was able to win the title of the fourth round of the virgin folds through the “Shahiniya” presented by Muhammad Ateeq. Zaytoun Al Muhairi is on top with a time of 12:17:5 minutes. On the other hand, the morning period witnessed the first appearance of the adult camels of Their Highnesses Sheikhs at the Dubai Crown Prince Camel Festival 2023, through 14 challenges in the age of twos for a distance of eight kilometers.

The implicit Muhammad Ateeq Zaytoun Al Muhairi led the “Al-Shahiniya” to the presidency to win the title of the main race of the virgin couples in a time of 12:29:7 minutes, while “Shaheen” won the storm’s camel in the lead in the main round of the two-legged couple under the leadership of the implicit Ghiath Al-Hilali with a time of 12:34 :6 min.

Muhammad Ateeq Zaytoun Al-Muhairi added the second title to the slogan of the camel of the presidency through his leadership of “Al-Shahiniya” to the top of the virgin folds in the third half, with a time of 12:29:2 minutes, and the same brilliant track returned to obtaining first place in the fourth round of the virgin folds by presenting it to (Al-Shahiniya ) He came to the presidency with a time of 12:18:6 minutes, which was the best time in the morning period. On a related level, the masterpiece of purebred Arabian camel fields in Al Marmoum will host the activities of the Hawl and Zamoul challenges for the camel of the tribesmen within the Dubai Crown Prince Camel Festival 2023. The race distance is eight kilometers.