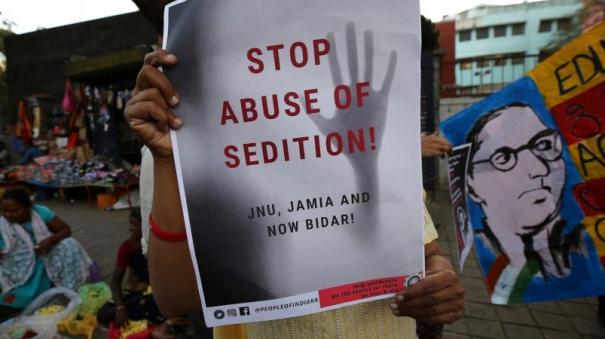 The five-judge Constitutional Court ruled in 1962 in the Kedarnath case that the treason law introduced during the British rule was valid. A case was filed in the Supreme Court seeking reconsideration of this judgment as the law was being misused. The case was heard by a three-judge bench comprising Chief Justice NV Ramana, Justices Surya Kant and Hima Kohli yesterday.

At the time, the federal government said it would reconsider the law because many state governments misused it.

The judges then intervened and questioned whether the case could be stayed under the treason law until the federal government reconsidered.

Solicitor General Tushar Mehta said he would ask the central government to respond. Accordingly, he replied in the Supreme Court yesterday:

Until the federal government reconsiders the anti-treason lawsuit, it should suspend the hearing on the petitions filed against it. Since 124-A is a criminal case, the authorities under it could not prevent the prosecution.

Before registering this case against individuals, S.P. The officer of rank should inspect. Section 124-A should not impose a total ban on the trial of pending cases. Some may be charged with terrorism or financial fraud. In pending cases, the accused can approach the courts for relief. Their bail pleas should be heard soon. Until the treason law section is reconsidered, the court must issue an interim injunction.

Senior advocate Kapil Sibal objected, saying Section 124-A should be repealed as it is unconstitutional.

The order issued by the judges then stated:

Attorney General KK Venugopal said in a petition that a case has been registered under Section 124-A against those who sang Hanuman Duti recently.

We expect the review of this Act to be completed and not to apply this Act until then. As this section of the law is being reviewed to uphold justice, its use has to be discontinued.

This is a complex task as it is requested to balance both the security of the state and the freedom of the people. If new cases are registered under the treason law, the accused can approach the court and seek relief.

Appeals in this case should be stayed for the time being. The federal government must issue orders to the states to comply with the Supreme Court order. The case is being re-assigned to another day, July 3.