The sweet smell of “oud” receives pilgrims at the Grand Mosque 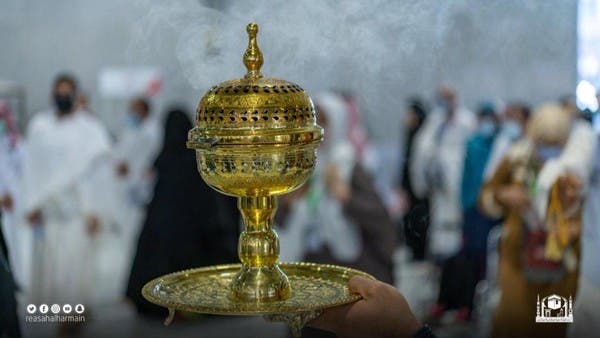 
As soon as the delegations of pilgrims came to the Holy Mosque in Makkah, the smell of the pure oud smelt, to witness the vapors of perfume rising over the heads of the pilgrims, as the General Presidency for the Affairs of the Grand Mosque and the Prophet’s Mosque proceeded to make programs for the pilgrims to welcome them with sweets and Arabic coffee to celebrate the feast and the pilgrims.

The Director of the General Department of Social Services at the General Presidency, Janadi Madkhali, stated that this initiative provided joy for Eid and the arrival of pilgrims to the Grand Mosque to perform the Tawaf al-Ifadah. He said: “Eid is joy in the hearts of Muslims, and the joy in the Grand Mosque today is two joys: the first is the joy of Eid, and the second is the joy of the arrival of pilgrims.” To the Sacred Mosque to perform the Tawaf al-Ifadah, after they stood in Arafat and spent their nights in Muzdalifah, and threw the Great Jamrah, and they arrived at the Sacred Mosque safely and soundly.”

The Affairs of the Two Holy Mosques also perfumed and fumigated the Grand Mosque with the finest and finest types of perfume, in celebration of the arrival of pilgrims to the Grand Mosque to perform the Tawaf al-Ifadah, at a time when the Perfume and Incense Unit intensified its efforts during the Hajj season of this year 1442 AH, to fumigate the Grand Mosque, as well as the chapels around the clock.

While the delegations of this year’s pilgrims completed the Tawaf al-Ifadah, yesterday, amid a system of precautionary services and measures inside the Grand Mosque, and the intensive preventive measures taken by the General Presidency for the Affairs of the Grand Mosque and the Prophet’s Mosque within its field, guiding, preventive, technical and engineering plan to ensure smooth grouping of pilgrims to perform their rituals easily and easily.

Fideilus after being eliminated from La voz Peru by Mike Bahía: Too bad it ended like this

The coalition: Destruction of 2 drones and 4 ballistic missiles towards Jazan

Corona Second Wave Danger Bells .. Thousands of phone calls to Sonu Sood for help .. If he sees the response ..!

If you decide to open schools start with elementary school first: Interview with ICMR President