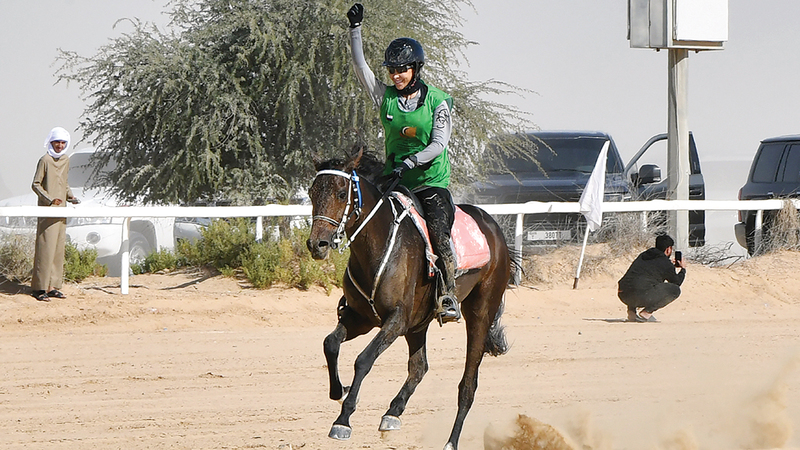 Syrian rider Massa Adnan won the Yamama Cup title at the Dubai Crown Prince Endurance Festival for a distance of 119 km, yesterday, in the Dubai International Endurance City in Seih al-Salam, with the participation of 119 male and female riders from various stables and equestrian clubs in the country.

Masa Adnan clinched the title on horseback “Fantastica”, owned by F3 stables, after she came in tenth place in the first stage, then advanced to fifth place in the second stage, and continued her progress in the third stage by rising to fourth place, before rising to the fore in the stage The fourth, and the rider Abdullah Muhammad Al Hammadi came in second place on horseback “HC Jalal”, owned by Al Reef Stables Ajban, and the rider Abdul Rahman Saeed Al Ghailani came in third place on horseback “Lucky”, owned by Al Wathba Stables 1.

In the stages of the race, the rider Mansour Khamis Al-Shadi topped the first stage for a distance of 40 kilometers on horseback “Illara Gomara”, owned by F3 stables, and the rider Maitha Al-Kaabi came in second place on horseback “Lanamer Desire”, owned by the stables of Seih Al-Salam 2, and thirdly the knight Khalifa Al Mazrouei on horseback «Azaria», owned by Al Raoud Stables.

In the second stage, for a distance of 32 km, the rider, Saeed Al Shamsi, jumped from 19th to the first on horseback “Raw Generala”, owned by the M7 stables, while Mansour Al Shadi fell to second place, and the third came the knight Saeed Al Khayari, advancing from the 13th place on horseback. Expermentada”, owned by M7 Stables (2). Saeed Al Shamsi maintained the lead in the third stage for a distance of 27 km, Al Khayari advanced from third to second, and Zayed Al Muhairi jumped from 17th to third on horseback “Pocho de Vere”, owned by Jumeirah Stables.