The T Shirt Affair | Why don’t you see the poor children in tattered clothes? – Rahul’s question to the media 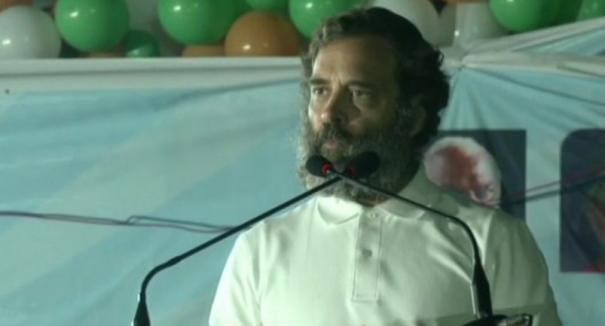 Pakpat (Uttar Pradesh): Can’t you see that poor children are wearing ragged clothes even in the current winter season, Congress MP asked. Rahul Gandhi has raised a question to the media.

Rahul Gandhi, who is on the India Unity Yatra, is currently trekking in Uttar Pradesh. Speaking at Bhagpat, he said, “It is controversial that I am wearing a t-shirt during the Indian Unity Yatra. Children of poor peasants and laborers are in tattered clothes even in this winter. Many such children are participating in this pilgrimage with me. But the media does not question their presence in extreme cold without proper clothing. The real issue isn’t that I’m wearing a t-shirt. But the real problem is that there are poor children who do not have the opportunity to wear warm clothes in this extreme cold. Why is the media not talking about it?

In the past, those who joined the army would serve for 15 years. Then they will get pension. But currently, there is no pension for those who join the Agniveer scheme brought by the central government. After just 4 years of service they have to leave. After that they have to suffer without employment. This is the Agniveer scheme brought by Prime Minister Modi. The central government threatens the youth if they protest against this. It creates a situation where the protestors are photographed and they are no longer able to get government jobs. Youths are scared because of this policy of BJP. “BJP is threatening many people like farmers and workers,” he said.