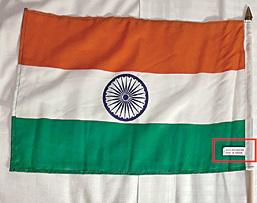 Hollybacks: The 65th Commonwealth Parliamentary Conference is being held in Halifax, Canada. Speakers of all state legislatures in India, led by Lok Sabha Speaker Om Birla, participated in this.

Then the Indian delegation went to the conference with national flags. The Indian team was shocked to see that the flag had ‘Made in China’ stamped on it. The state Speakers took the matter to Lok Sabha Speaker Om Birla. Now this issue has become a controversy. Opposition parties have criticized the central government for importing even national flags.

We went to the convention with national flags to show the country’s pride. But the flags were marked as Made in China. We brought this to the notice of Lok Sabha Speaker Om Birla.

There is no need to import national flags from China. There are many printing plants in India, especially Tamil Nadu at places like Sivakasi, Erode, Karur and Namakkal. If you place an order at night, they can deliver 100 national flags the next morning. It is not known why such a situation occurred. This is what he said.