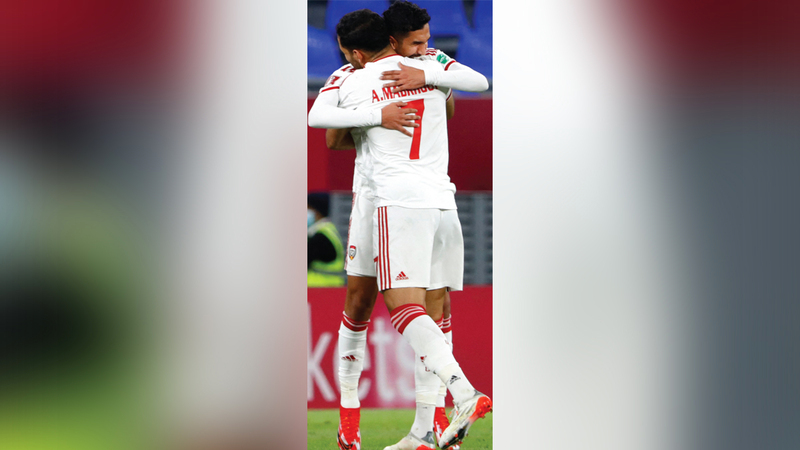 The national football team will play at 7:00 pm today, UAE time at Stadium 974, a decisive confrontation against Tunisia in the third and final round of the group stage for the second group in the 2021 Arab Cup, which is currently being held in Doha, with the participation of 16 teams, as the two teams compete for qualification. For the next round, the team is looking to consolidate its lead and win the qualification for the quarter-finals, and write a new history in this tournament.

At the same time, an important match will be held between the teams of Syria and Mauritania to determine the two teams that have qualified for the semi-finals from the second group, noting that the Mauritanian team left the official championship after suffering two losses against Tunisia and the UAE.

It is enough for the national team to draw against Tunisia and collect only one point to raise its score to seven points and to top the group and qualify for the gold square, and any result other than a win or a tie will enter it into complex calculations, while the Tunisian team, nicknamed “The Eagles of Carthage”, needs to win and by a difference of goals to ensure qualification. for the next round.

In this match, the team is looking to achieve its third consecutive victory in the tournament, after beating Syria 2-1, scored by Caio and Ali Saleh, and Mauritania with a clean goal scored by substitute player Khalil Al Hammadi in stoppage time.

The struggle was limited to the two qualification tickets for the next round between the UAE, Tunisia and Syria teams.

The technical staff of Al-Abyad, led by Dutch coach Van Marwijk, is counting on the readiness and high morale of the players, after winning two consecutive matches to play this decisive match in his career in this tournament.

During today’s confrontation, the team is seeking to exploit all its winning cards led by Ali Mabkhout and Kaio Kanedo, while the main goalkeeper Ali Khaseef is expected to return to the squad again, after he sat on the bench during the Mauritania match, as well as defender Mahmoud Khamis, who also missed the previous match due to suspension.

It is expected that the team will play today’s match with the same squad that it played in its previous match against Mauritania, with some minor changes, given the importance of the match in determining the fate of Al-Abyad in this tournament.

The UAE and Tunisia teams did not meet together in the history of their official participation, except in one confrontation, which was in 1975 in the Arab Championship (Palestine Cup), which was held in Tunisia, and ended with a 3-0 victory for the Carthage Eagles.

At the level of the Tunisian team, which is one of the strongest teams in the group and the tournament in general, it has previously participated in the tournament twice, and was crowned with the title of the first edition that was held in Lebanon in 1963, while the tournament was eliminated from the group stage during its second participation in the Jordan edition in 1988.

The Tunisian team, which includes a group of distinguished and professional players, including Ajman club player Firas Belarabi, who scored two out of the five goals scored by Tunisia against Mauritania, seeks to restore his reputation and regain his position in the wake of the severe loss he suffered in the last round against Syria with two goals without He responded and his score froze at only three points in second place behind Al-Abyad, a net difference of a goal from the Syrian team, which is third with three points, and Mauritania is in the last place without a score.

Although the Tunisian team had started its campaign in the tournament with a big victory over the Mauritanian team by five goals to one, but it came back and fell against Syria in the last round.

Ranking of the second group teams

• One official match between the two teams in 1975, which ended with Tunisia’s 3-0 victory.