The team’s chances of lifting the “Gulf 25” cup are strong, with 3 conditions 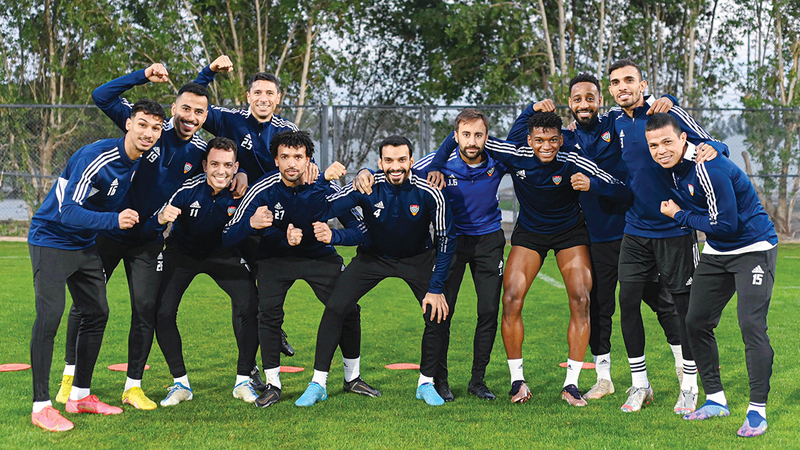 Athletes and technical analysts identified three conditions that would enhance the national team’s chances of competing for the 25th Gulf Cup title, which starts in the Iraqi city of Basra today, and continues until the 19th of this month. Harmony and understanding between them, in addition to playing with a high fighting spirit, noting that the Football Association played its role in providing the appropriate environment that enables the team to appear honorably in this great Gulf wedding, and that the ball is now in the court of the national team players to achieve a new achievement for Emirates football, and to enter The joy is in the hearts of the Emirati audience, by repeating the scenario of winning the title twice, in “Gulf 18 and 21”.

They told “Emirates Today”: “The national team players and their technical staff, led by Argentine coach Aruabarina, realize the importance of the upcoming Gulf championship for the team in order to win its title and delight the Emirati public, especially since the team was long absent from the podiums, and the last time was its victory in the Cup title. The Gulf in 2013 in Bahrain, so everyone is counting on the current generation of national team players to have their mark in UAE football in general, and in the Arabian Gulf Cup in particular.

The national team will start its matches in the tournament against Bahrain, the “defending champion”, tomorrow, in the second group, which includes the teams of Kuwait and Qatar.

And the former Olympic team coach and technical analyst, Abdul Majeed Al-Nimr, believed that the team’s chances are supposed to be strong in competing for the next Gulf Cup title, especially in light of the participation of some teams in the tournament with second-row players, such as Saudi Arabia and Qatar, and he said: “The tools available to The technical staff of players who were selected in the final list is good.” He stressed that “there are some players who were not selected, due to some recent disciplinary suspensions and injuries.”

He added, “Certainly, the national team’s chances are stronger in winning the Gulf Cup, given that it participates in the tournament with first-class players, and if we exclude the Kuwaiti team, which did not perform well in the recent period.”

He explained, “In my estimation, the competition for the championship title is supposed to be confined to the UAE, Bahrain and Iraq teams, as they are the most prepared.”

Former member of the board of directors of Dibba Al-Fujairah Club and former director of the club’s first team, Juma Al-Abdouli, stressed that the team must be present in the next Gulf Cup in order to compete, and the players and the technical staff of the team must realize this, stressing, “The team has the ability to compete for the title, Because he has special players.

For his part, the former international coach and goalkeeper, Moataz Abdullah, said, “The Arabian Gulf Cup is a great challenge for coach Aruabarina more than a challenge to the players, after the challenges that the coach imposed on himself, because the championship will determine his continuity or not, as well as the conviction of the sports street in him or not.” Especially since coach Aruabarina, after being appointed coach of the national team, had three challenges ahead of him that he had to achieve, the first of which was qualifying for the World Cup, and this was not achieved, and the second item remains before him, which is winning the Gulf Cup.

Moataz Abdullah added, “The problem with the Arab Gulf Cup is that it will be held after the 2022 World Cup, which was held in Qatar, which represented a hearty meal of global football fun.”

In turn, the former international player and coach in the youth sector in the Football Association, Nawaf Mubarak, confirmed that “the team’s chances are strong in competing for the Gulf title, along with Saudi Arabia, Iraq, the host country, and Bahrain,” noting that “the Saudi team is one of The candidate teams, even if he plays in the second row, because he has a strong quality of players.

Nawaf Mubarak added, “In my estimation, the UAE national team has the potential to compete, but it needs the players to be at the heart of one man, and for the players to have a clear goal.”

The classification of the Gulf teams from “FIFA” in December 2022

The market value of the Gulf teams