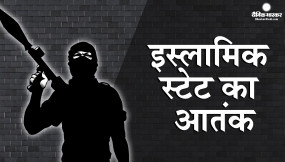 Digital Desk, Baghdad. The cowardly act of the terrorist organization Islamic State, which is known for its dreaded terror around the world, has once again created a ruckus in Iraq and Syria. Let us tell you that the dreaded terrorists of IS killed about 29 people in a single day from Iraq to Syria.

Let us tell you that while talking to the Associated Press, two Iraqi security officials said that militants of the Islamic State group entered the barracks at 3 a.m. local time and shot dead the soldiers. It is worth noting that Islamic State terrorists have been targeting Iraqi soldiers in the past as well. The attack in the northern area of ​​the capital Baghdad is believed to be a far bigger attack than the recent attacks in a month.

IS attacked the prison

Let us tell you that the terrorists of Islamic State have attacked the Al-Hasaka prison in Syria to free their comrades. According to media reports, Islamic State fighters killed Kurdish security forces in this attack.

According to a human rights organisation, some prisoners managed to escape after ISIS fighters attacked the prison. The Kurdish-led US-backed Syrian Democratic Forces in Syria said in a statement that fighters of the self-proclaimed Islamic terrorist Islamic State had attacked the prison to free their comrades.

So many suspects of Islamic State lodged in jails

Let us tell you that more than 12,000 suspects of the dreaded terrorist organization Islamic State are lodged in jails. The detainees are from countries ranging from France to Tunisia, but officials in those countries are not taking them back for fear of public backlash. The prisons where the suspects are held are one of the largest holding facilities for IS fighters in a semi-autonomous region controlled by Kurdish authorities in north-eastern Syria. IS fighters keep trying to free their captive comrades and attack whenever they get a chance.