The title in his homeland Al-Ain .. “Five and Five” 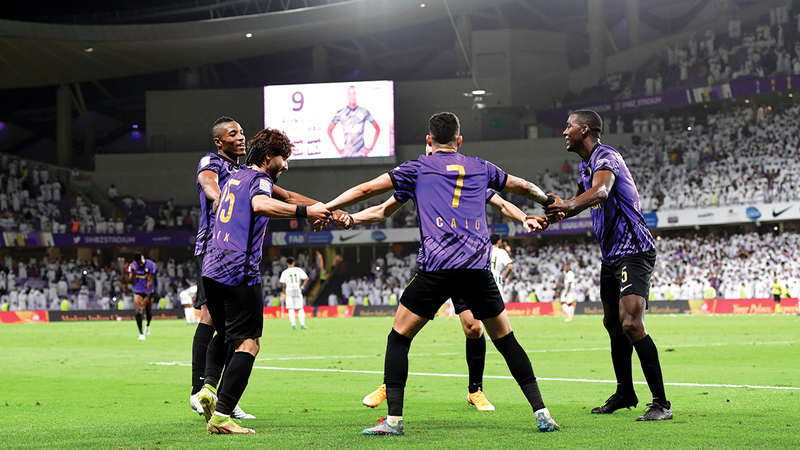 Togolese international Laba Kodjo led his Al Ain team to a big victory over Al Jazira by five clean points. Laba scored four of them during the two halves of the match that was held yesterday evening at Hazza Bin Zayed Stadium in the 23rd round of the ADNOC Professional Football League, to officially crown the team with the title of the competition for the 14th time. in its history.

Attention was directed to the Al Jazira team, as it represented a “historic knot” for the Al Ain team at the Hazza Bin Zayed Stadium over the past years, in which the team did not achieve victory over its opponent, but winning a clean five set things back in place after many years, so that the Ain’s memory in untangling the historical knot is linked. winning the league title.

Despite the atmosphere that preceded the match, which indicated the difficulty of Al Ain’s task based on previous confrontations, the Al Ain team did not find any difficulty, as it scored five times over the two halves.

For his part, Dr. Matar Al Darmaki, Chairman of the Board of Directors of Al Ain Football Club Company, congratulated His Highness Sheikh Mohamed bin Zayed Al Nahyan, Crown Prince of Abu Dhabi, Deputy Supreme Commander of the Armed Forces and President of Al Ain Club, on the occasion of Al Ain team winning the league shield for the season. Football 2021-2022, “the 14th shield in the club’s history.”

He added, during his speech to the official website of Al Ain Club: “I would like to congratulate my brothers, members of the Al Ain Sports and Cultural Club’s board of directors, for the second title in the current football season after winning the Professional Cup and resolving the league title three rounds before the end of the competition. With the club’s subsidiaries and all its departments and sectors to work in the spirit of one family in order to create the reasons for success for the team that was able to achieve the desired ambitions in the current football season.”

The President of Al Ain Football Club praised the men of “Al-Zaeem” champions of the ADNOC Professional League, the stars of the first football team, the technical staff led by the able coach Sergey Rebrov, the administrative staff led by Abdullah Ali Al Shamsi, the medical staff and every member of the football company for their commitment, seriousness and work in the spirit of one family Until they were able to achieve the club’s goals, which are consistent with their personal ambitions and their participation in spreading joy and happiness throughout the most beautiful city.

Dr. Matar Al Darmaki saluted the Al Ain nation, which directly contributed to the club’s accomplishments in the current football season, and said: “It is not strange for the Ainwi nation. Al-Zaeem’s fans succeeded in making the difference in all stadiums inside and outside Al Ain.