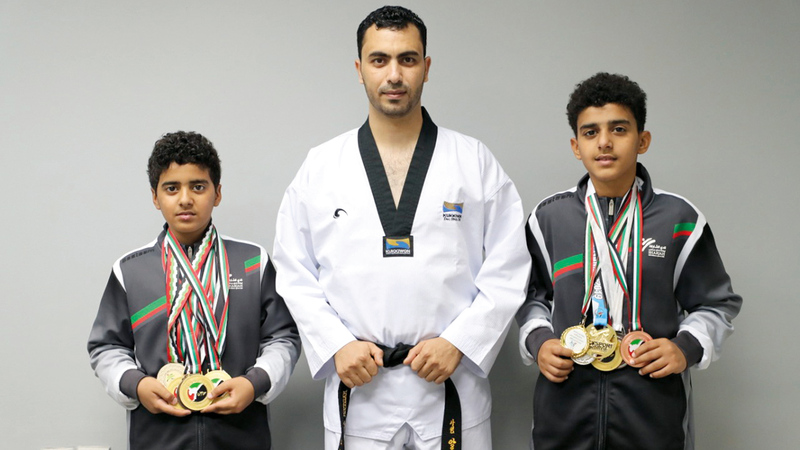 The players of the youth national team and the Sharjah Club for Self-Defense Sports in Taekwondo, the brothers Abdul Rahman and Hamdan Al-Qarmati, are looking forward to be distinguished players to represent the UAE in international forums in the near future, and to qualify to play in the upcoming Olympic Games and win Olympic medals, so they train in a strong and regular manner in order to achieve this Objectives.

In this context, the Chairman of the Sharjah Self-Defense Sports Club, Ahmed Abdul Rahman Al Owais, affirmed that the project to prepare the Olympic champion is one of the club’s most important future directions, through the vision of the Sharjah Sports Council and through the “24 Accelerators” initiative, and every talent of the club receives support. Necessary to enhance his talent.

Al-Owais told “Emirates Today”: “The two players, Hamdan and Abdul Rahman, are considered a strategic project to prepare the Olympic player and the champion in Taekwondo, and that their persistence in high discipline and commitment to training will eventually reach them to reach the international Olympic platforms, and since their exploration they have been closely monitored by the Sports Training Administration and care. In all aspects, they are also excelling in studies, and we commend the encouragement of their family by providing a positive atmosphere for them, and we look forward to achieving success for them. ”

Profile of the two heroes

Abdulrahman (14 years old) joined the national team after winning a number of medals that encouraged him to continue his beloved sport, including during his participation in the European camp in Estonia 2019, and gold in the UAE Open.

Abdul Rahman said to “Emirates Today”: When I started, I did not put in my mind these aspirations because of my lack of knowledge of Taekwondo. However, I found in Sharjah Self-Defense Sports Club an environment that encouraged me to raise the ceiling of my aspirations and the coaches encouraged me to get first place.

In turn, Hamdan (12 years old) joined the national team in the year 2021 and enjoys good patronage because of his artistic and mental capabilities that nominate him to be a champion in the near future, and among the most prominent medals he has achieved so far is winning a gold medal in the European camp in Estonia and a gold medal in the UAE championship. .

Hamdan told “Emirates Today”: “I am still in the prime of life and devote my time to Taekwondo and strive hard to adhere to the exercises, and I am keen to implement the instructions. The trainers encourage me a lot and tell me that my regularity will lead me to success.”