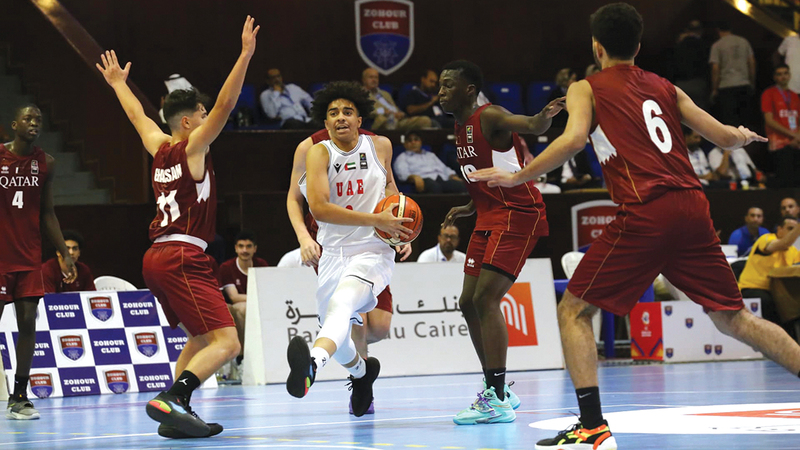 The national youth team will launch, at 6:15 this evening, with its Bahraini counterpart, the journey in the Gulf Basketball Team Championship for the age group (under 18 years), held at Al-Wasl Club Hall in Dubai, until August 6, which qualifies for the Asian Cup.

The national team’s match, at four in the afternoon, is preceded by the meeting of the Saudi and Omani teams, provided that the curtain falls on the matches of the first day, at eight thirty in the evening, with the meeting of Qatar and Kuwait.

Yesterday, the technical staff of the team, led by national coach Salem Atiq, put the final touches on the main list of the 12 players who will represent Al-Abyad in the tournament, out of a list that included during the preparation stages 14 players, most of whom preceded the participation early this month, in the Arab teams championship (under 18 years old) in Cairo, and they are: Salem Al Shamsi, Rakan Al Shammari from Al Ain Club, Saeed Hashel, Mohammed Jaber, Rashid Abdul Rahman, Zayed Tawfiq (Sharjah), Zayed Abdullah, Mohammed Saeed, Zayed Tariq Al Sayed (Al Wahda), Saif Hamed and Abdulaziz Khalifa ( Al-Wasl), Hussein Nasser (Al-Ahly Youth), Hassan Al-Sayed, and Hamad Saleh (Al-Nasr).

The Gulf championship comes about a week after the curtain came down on the Arab teams championship in Cairo for this age group, in which the national team ranked fifth, in a championship that the Egyptian team won, at the expense of its Algerian counterpart, Qatar ranked third, Kuwait fourth, and Saudi Arabia ranked Sixth and last.

For his part, national team coach Salem Ateeq confirmed that the team finished its preparations for the tournament with the ambition of extracting one of the two qualifying cards for the Asian Cup finals, pointing out that the morale of the players is high, and injuries do not disturb the technical staff of “Al-Abyad” after participating in the Arab championship, which was closed. It was unveiled last week, especially with the team’s top scorer, Abdulaziz Khalifa.

Atiq told “Emirates Today”: “The players underwent a period of rest and recovery upon returning from Cairo, before returning to the exercises that included the medical staff continuing to treat the injured players.”

He added, “Despite the lack of time between the two tournaments, everyone is determined to give his best for the honorable representation of the UAE Basketball Association, as we worked during the training to address all the errors that appeared in the performance of our players in Arab Cairo.”

Regarding the opening match, and the chances of competition for qualification cards for Asian, Atiq said: “We enter the Bahrain match with a high concentration, especially since we do not have clear information about the opposing team, for not participating in the Arab Championship.”

He concluded: “Most of the participating teams are close in level, which does not give any advantage to one team at the expense of another, and we have to focus in every match we play in order to achieve the goal of qualifying for the Asian Cup.”

He concluded: “We will work, during successive matches, to distribute the effort among the players, with the aim of avoiding the recurrence of any possible injury to our influential players, which gives us the ability gradually to achieve the desired goal.”