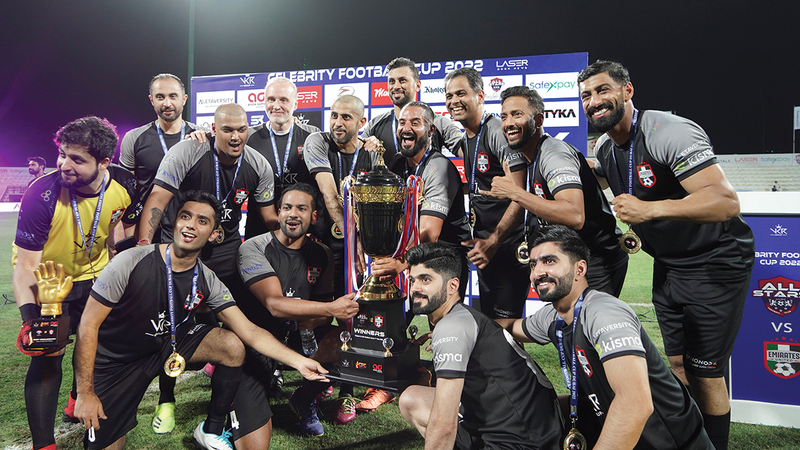 The “Emirati Al Ittihad” team achieved a 3-0 victory over the Emirati All-Star Team “ASFC”, which included Bollywood celebrities, in a charitable match organized by “AG Events” for events, and hosted last Saturday evening by Shabab Al-Ahly Stadium in Dubai, in a brilliance match. In it, the Lebanese basketball legend, Fadi Al-Khatib, opened the recording for his team, and the social media influencer Abdulaziz bin Baz scored the third goal.

The players of the “UAE Federation” team also imposed their sway over the prizes of the match, with the social media influencer Abdulaziz bin Baz receiving the Golden Boot award, and the goalkeeper winning the Golden Glove award.

The match came as part of an initiative presented by the sports department of GS Worldwide Entertaiment, which is based in Mumbai, and aims to collect donations through charitable works and sports activities, including football.

Nasr Al Neyadi commented on the victory of the “UAE Federation” team, and the importance of participating in charitable initiatives, saying in press statements: “The (Emirati Union) team is proud to participate in this important event, the proceeds of which go to charitable work,” adding that: “Playing against a team ASFC is an unforgettable experience for us, and we are happy to support this noble initiative and provide assistance to many in need, and we look forward to more interesting and noble events in the future.”

In turn, CEO of AG Events, Ayosh Gupta, said: “The Celebrity Cup has been a huge success for the players and the public, which came along with achieving a noble goal in terms of the beneficiaries of this initiative.”

He added, “We are very pleased that the first celebrity football match here in Dubai was such a resounding success, and that it showed that the people of Dubai are always ready to unite, for lofty goals through sport.”

It is noteworthy that the ASFC celebrity team included many Bollywood and film stars, such as Kartik Aryan, Vivian Dsena, Rohan Schreich, and film director Shujit Sikar.