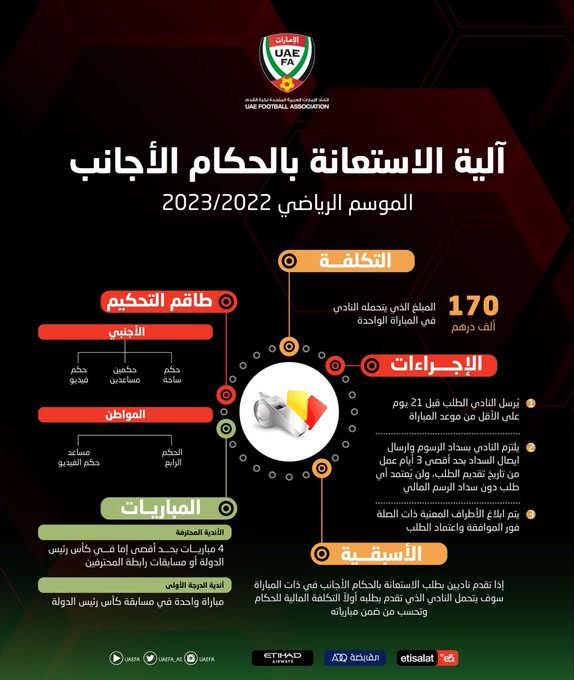 The Emirates Football Association has set the conditions and the mechanism for using foreign referees in the President’s Cup and the Professional League during the new football season 2022-2023, as the cost of the material amount borne by the club per match is 170,000 dirhams, and the club must request the arbitration staff before 21 At least one day from the date of the match and to commit to paying the fees and sending the amount within a maximum of three working days from the date of submitting the application

The Football Association said in a tweet on its official account on the social networking site “Twitter” that it will not approve any request without paying the financial fee, provided that the relevant parties are informed immediately after the suspension and approval of the request.

It is noteworthy that the Football Association had allowed clubs to use foreign referees in the UAE League, starting from last season, according to specific conditions and mechanism in this regard.

At the level of first division clubs, the club has the right to use a foreign referee in only one match in the President’s Cup competition.

Among the conditions set by the Football Association is also that in the event that two clubs apply for the use of foreign referees in the same match, the club that first submitted its request will bear the financial cost of the referees and it will be counted among its matches.