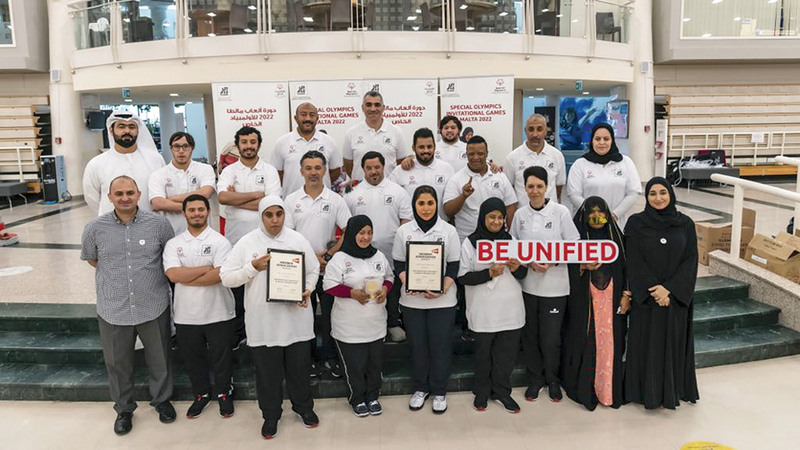 The Malta tournament is the first for the International Special Olympics since the “Covid-19” pandemic receded, and the UAE Olympics will compete in the tournament for the bowling, swimming and bocce titles, in a list that includes both players Maryam Al Hosani and Omar Al Shamsi participating in a unified team with the national team players in bowling, Reem. Jamal and Abdullah Al-Jaidi, with Omar Al Shamsi, Muhammad Al-Zubaidi and Awad Al-Ketbi representing the state in swimming, and Abdulaziz Al-Gharib, Faisal Al-Marzouqi, Hamda Murad and Shaima Al-Naqbi will carry the competition banner in the bocce game.

The country’s players prepared to participate in the Malta Games, by setting up a closed camp in Abu Dhabi since the sixth of this month, which spanned for six days, during which the players underwent intensive daily training, during which bowling players trained at the Khalifa Bowling Center and Zayed Sports City, while swimming exercises took place. At the Mohammed bin Zayed Sports City Center, bocce training was organized at the Abu Dhabi Club for People of Determination in Mafraq.

Last Tuesday, the Ambassador of Malta to the country, Maria Camilleri, was keen to visit the UAE Special Olympics players at their training camp in Madinat Zayed before they traveled to participate in the Malta 2022 Games. For its players to integrate and participate in sports and international, and to enable them to perform their positive roles in society.

The National Director of the Emirati Special Olympics, Talal Al-Hashemi, confirmed that preparations for the Malta tournament began a long time ago, and he said in a press statement: “Although the training camp was scheduled for the sixth of this May to prepare the players immediately before their departure, the players underwent regular training several months ago. We are proud of the great efforts made by our players, coaches and organizers in preparing players who are able to achieve achievements and open up to the world with confidence, and to build on the legacy of our great success in the Special Olympics World Games in Abu Dhabi 2019.”

He added: “Our participation in the Malta 2022 Games in bocce, swimming and bowling will come as part of our preparations to participate in the Special Olympics World Summer Games to be held in Berlin 2023. I wish all the best to our players in Malta and reflect the high level of integration we have reached in the UAE.” I also thank Aldar Properties for sponsoring our participation, as well as the Integrated Transport Center for supporting the players.”

For her part, Director of Sustainability and Corporate Social Responsibility at Aldar Properties, Salwa Al Muflehi, said: “The participation of the UAE Special Olympics in the Malta 2022 Games reflects the role that sport plays in empowering people of determination in society and unleashing their energies and capabilities.”