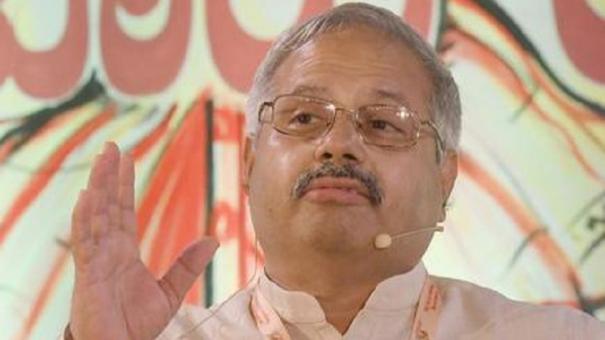 New Delhi: The Udaipur incident has a Taliban mentality. This is not just a reaction to speech but the impact of a belief system, said Sunil Ambekar, head of the publicity wing of the RSS wing.

Held in Delhi The Taliban: War and Religion in Afghanistan, The Forgotten History of India Sunil Ambekar recorded this opinion at the launch of the books. These books are written by Arun Anand.

He then made his point by referring to the Udaipur incident. He also alleged that some things in history are deliberately hidden.

Earlier yesterday, Nubur Sharma’s petition came up for hearing in the Supreme Court. Then the court gets fired up with Nubur Sharma’s speech about India. He should apologize to all the people of the country for his speech. It was suggested that his speech was the catalyst for the incident in Udaipur.

Sunil Ambekar, speaking in front of this, said that the incident in Udaipur had a Taliban mentality. It is not a stimulus response. It is the influence of the belief system. Terrorist organizations such as Hamas, ISIS and Taliban are operating in the world. In our country we have SIMI and BFI (Popular Front of India). So the Udaipur incident was not motivated by speech. This needs to be explored further. It requires understanding the attitude of certain belief systems.

The Indian nation cannot use its strength to help each other. A good person should help others. Those who disturb the peace should be stopped. The issues should be resolved in a constitutional way. People need to understand the mindset of the Taliban. Our country was divided by religious fundamentalism. So we need to understand this. We need to find out if any of the people here are in touch with the fundamentalist nations. We must show the world what betrayal of trust is.

Let us know the partition history: There are many people who have sowed the freedom of this nation. But not everyone is being talked about here. No one talks about INA. Contribution of RSS is always hidden. On July 12, 1922, Dr. Hecatevar was released from prison. Rajaji and Mothilal Nehru would have spoken at the event to welcome him. All that talk should be brought out and popularized now.

People should be told about VT Savarkar, Netaji Subhash Chandra Bose and Birsa Munda. Only then people will know that India was united even before independence. The fake history that the British united India will disappear. Look back in history. It will be known how public property and secularism were included in the constitution. This should be added to the younger generation.

Similarly, the youth should be clearly told why the partition of India took place. Some historical events are never discussed. Discussing it will prevent such incidents from happening again. It is important to know these incidents so that the country is not attacked again. If you know the history of partition, you will know the history of terrorism.