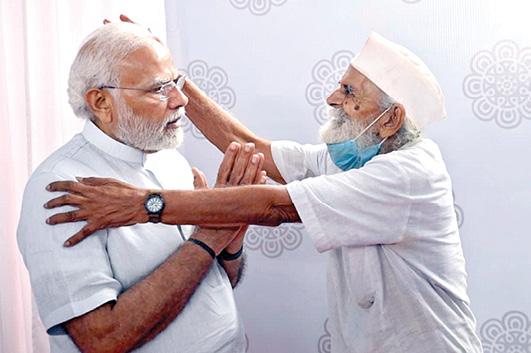 Navsari: Prime Minister Narendra Modi has said that the welfare of the people is the chief duty of the government.

Gujarat is set to go to the polls later this year. In this context, Prime Minister Narendra Modi left for Gujarat yesterday on a one-day visit. Attended various shows there.

Speaking at a function in Gudwel, a tribal-dominated area in Navsari district, the Prime Minister inaugurated various projects worth Rs 3,050 crore:

It is gratifying that more than 5 lakh tribal people have gathered here. Gujarat is growing rapidly as the central and state governments work together. Surat, Navsari, Valsad and Tabi districts of South Gujarat will see tremendous growth with the projects laid today. The drinking water and road facilities of the region will be improved.

Eight years ago the people of Gujarat sent me to Delhi. During these 8 years the Central Government has successfully implemented various schemes to make the dreams of the people come true. Previous governments did not prioritize development. Thus the poor, the weak, the downtrodden, the tribals, the women all faced great difficulties in meeting the basic needs.

Steps will be taken to provide clean drinking water to every household in the tribal areas. Infrastructure will be upgraded. Educational institutions will be created. Road facilities will be upgraded. Steps are being taken to teach medicine and engineering courses in the mother tongue. Indigenous students will benefit from this. More doctors will come to this community.

I give the opposition a week’s respite. They can visit the tribal areas and find out if there are any shortcomings in the development plans. The BJP did not contest the elections for power. We are contesting the elections for the lofty goal of improving the people. People who benefit from government welfare schemes vote for the BJP. This is why the BJP is able to win the next elections.