“The West has staked a lot on its war against Russia” 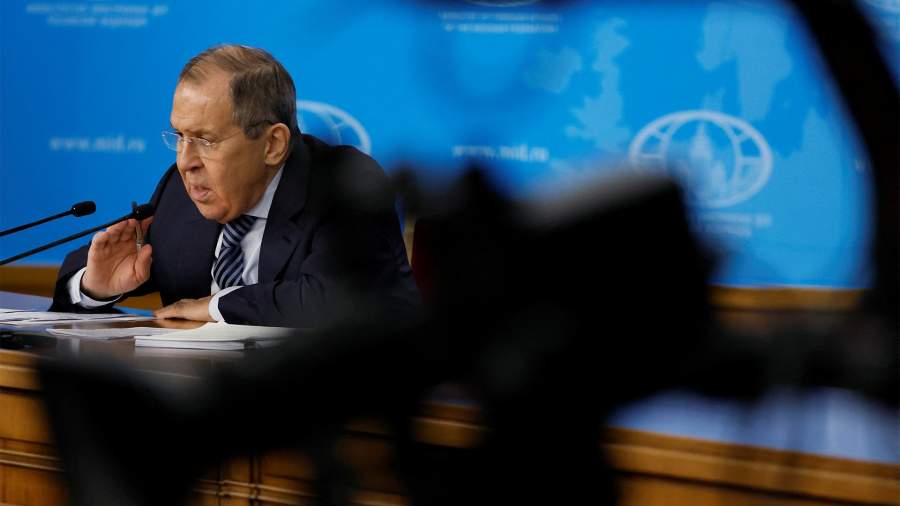 Today’s events in Ukraine are the result of many years of Washington’s preparations for a hybrid war against Russia in an attempt to prevent the formation of a multipolar world and to push through the dictates of the United States. This thesis became one of the main points in the speech of Russian Foreign Minister Sergei Lavrov at the big final press conference.. The red thread of the entire speech of the minister was the postulate that The European Union completely submitted to the Americans, losing its independence. At the same time, according to Lavrov, the United States and “their satellites” are now actively trying to pull off the same practice in Asia and many other regions of the world. However, in a three-hour communication with representatives of Russian and foreign media, there was also a place for positive – at the moment when the discussion turned to Russia’s relations with China, the Arab world and Latin America.

Sergei Lavrov’s speechannounced as a summing up of 2022 for Russian diplomacy, came out quite capacious and one might even say short. She only took half an hour. Which, however, more than compensated for the ensuing series of questions and answers, which lasted 2.5 hours.

Ukraine was predictably the main topic. Noting that Western colleagues (at first the Foreign Minister really called them that) tried to make the events in this country and around it the main media, economic and political event of 2022, Sergey Lavrov immediately recalled: “what is happening now in Ukraine is the result of many years of preparations by the United States and its satellites for a global hybrid war against Russia“.

To reinforce the fact that this thesis is shared by some figures in the West, the head of the Foreign Ministry mentioned a recent article by American political scientist Ian Bremer, who said that NATO is fighting Russia through Ukraine. He also referred to Croatian President Zoran Milanovic, who “frankly, honestly stated that this is a NATO war against Russia.”

– Therefore, when our Western partners deny and foam at the mouth prove that they are not at war with Russia, that they are only helping Ukraine cope with aggression, restore its territorial integrity, they are cunning. The volume of support clearly indicates that the West has put a lot into this war against Russia,” the minister said.

Sergey Lavrov even likened the US actions to create a coalition against Russia with the actions of Adolf Hitler. He stated that if at one time the leader of the Third Reich tried to solve the “Jewish question”, now Washington is uniting Europe against the Russian Federation in order to finally resolve the “Russian question”.

Wherein the collective West, according to the minister, has long ceased to be a community of equal partners, since “the European Union has completely submitted to the American dictate” and has become an “attribute of NATO”. The apotheosis of this was the signing on January 10 of a joint declaration between NATO and the European Union, “which directly states that NATO and the EU have the task of using all political, economic and military means in the interests of the golden billion.”

What these means, Lavrov also explained without embellishment: both the destruction of those mechanisms that the West itself created – the free market, fair competition, the inviolability of property, and “demonization, blackmail, sanctions, the threat of force and the West’s line of destruction traditional ties of historical partners”.

This was evidenced not only by the events in Ukraine, but also by what had previously happened in the Balkans and the post-Soviet space.

— Tomorrow or the day after tomorrow, these funds can be used against any state– Sergey Lavrov noted.

According to him, The North Atlantic Alliance has already encroached on the leading role in the Pacific regionwhich Washington and its allies have been stubbornly calling the Indo-Pacific for some time now, heading towards the creation of a bloc architecture there against Russia and China.

The most striking example of this was the emergence of the AUKUS alliance, where the United States is actively drawing Japan into it, “rolling up to South Korea” and “for sure will pull New Zealand and Canada there.” At the same time, the course of the United States to expand the bloc format occurs due to the undermining of those structures that formed the security architecture in Asia, primarily ASEAN.

“We will not run for the USA”

The topic of the States and Ukraine remained central even when the event came to the stage of questions from journalists. Criticism of both Washington and the Kyiv authorities sounded more than once. So, Lavrov twice reminded President of Ukraine Volodymyr Zelensky of his words that people in Donbass are “individuals” who, for the sake of their children, would be better off getting out of the country.

And, by the way, The head of the Foreign Ministry explained very clearly why Moscow does not consider the beginning of the NWO in Ukraine to be a violation of the UN Charter. According to him, the principle of territorial integrity enshrined in international law must be respected only in relation to states whose governments respect the principle of self-determination and represent the interests of all peoples living in a given territory. And this could not be said about the Kyiv authorities since 2014.

In addition, Sergey Lavrov made it clear that for now it is pointless to talk with the West only about Ukraine – the Eastern European country is used exclusively to destroy the security system in the Atlanticwhich included the solution of all issues through dialogue and the search for compromises.

There will also be no dialogue with Ukrainian President Volodymyr Zelensky, “if only because he legally banned negotiations with Russia.”

Lavrov reproached the American authorities not only for trying to impose their diktat on the rest of the world, but also for hypocrisy – declaring its intention to punish certain regimes with sanctions, in reality, the United States introduced restrictions that directly hit the people of the countries they did not like.

The minister also revealed an interesting detail: at the moment, the ratio of American and Russian diplomats working in the two countries is seriously outweighed in favor of the United States. This situation has arisen due to the fact that, contrary to the accepted practice, Washington included 140 employees of the Russian Permanent Mission to the UN in the parity staff.

— The Americans have a serious head start here. And when they cry about the fact that there is no one to issue visas – do not believe it. We have 140 fewer people through bilateral foreign agencies, we have not stopped issuing visas, we have not sent any American citizens to receive a visa to Venezuela, Cuba, or Nicaragua. We could, but we are simply not petty,” the head of Russian diplomacy stressed.

And at the same time, as if in passing, he said that American leader Joe Biden asked to arrange a recent meeting between CIA director William Burns and SVR head Sergei Naryshkin. And the fact that the Kremlin responded to this can also be considered another example of the fact that “we are not petty.”

Overall, Lavrov directly hinted that the ball was definitely not on the side of Russia. “It’s not up to us”, “we didn’t destroy relations with the USA”, “we will not run for the USA with proposals “let’s be friends””the minister uttered the same thought in different words, answering the question of how to normalize relations between Moscow and Washington.

At the same time, the Foreign Minister did not forget to note that Moscow is ready to respond to any serious proposals for negotiations with the West, just as long as they are not traced.

Galloping outside of Europe

Of course, the questions also touched upon Russia’s relations with other regions of the world, which was largely predetermined by the nationality of the representatives of foreign media. However, the American factor prevailed here as well.

Relations between Russia and China were called the ideal format for bilateral contacts – “relationships are pragmatic, trusting and based on a balance of interests.”

The West is trying to bring discord into our relations. We see all these games with China,” Lavrov said.

According to him, Beijing perfectly understands the doctrinal guidelines “first Russia, then China” and what risks for national development the work in the western financial and economic systems entails for the country. That is why the Russian Federation and China are gradually moving away from the dollar, servicing half of the trade turnover in yuan and rubles.

The Arabs, “our old and true friends,” did not let Moscow down either. As the minister noted, in the Arab world there is “an understanding of our position, an understanding that this is not about Ukraine, but about the struggle for a new world order between those who believe that the world should be subject to them, and those who want the world order to be democratic.

At the same time, there was also pressure on the countries of the Arab world, and considerable. As Lavrov said, three days before his speech in Cairo, where a meeting of representatives of the League of Arab States was held, a delegation of Western countries’ ambassadors came to the LAS Secretary General. They directly demanded that the minister’s speech be canceled, or that the Russian Federation be publicly condemned, or at least not be photographed with him. To this, the representatives of the Arab League member countries not only responded with a polite refusal, but also specially approached their Russian colleague after the event so that he could personally take a picture with them.

The main evidence that American pressure on the Arab world has not passed can be considered the fact that not a single country in the region supported anti-Russian sanctions. This, by the way, is also relevant for the vast region of Latin America and the Caribbean., the relationship with which was discussed later. The head of the Russian Foreign Ministry recalled that here, too, not a single state, with the exception of the Bahamas, has joined the anti-Russian sanctions.

Not left without attention were such regions as Central Asia, relations with the countries of which after the start of the NWO remained fairly even, and Africa. “As part of our contacts with the SCO, CIS, BRICS, associations of Asia, Africa, Latin America, we are trying to build such forms of interaction that will benefit us and that those who want to rule the world cannot influence,” Lavrov summed up.