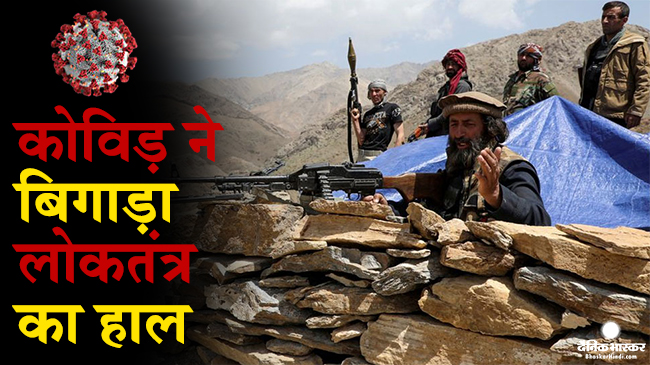 Digital Desk, New Delhi. Democracy has been spoiled, or trying to be spoiled, by the governments of many countries all over the world by taking undemocratic and unnecessary actions. An international report released a few days ago revealed that during the Kovid Pandemic, the governments took unnecessary decisions, which indirectly affected the country’s democracy. The report of this intergovernmental body has revealed that in many actions the power of democratic governance was misused to serve its own interests. The 80-page report by the Intergovernmental Organization, whose mission is to advance democracy around the world, noted “the remarkable strength of civic activism”.

The International Institute for Democracy and Electoral Assistance, or International Idea, in its report claimed that many democratic governments are retreating. The 34-nation organization said that by August 2021, 64% of countries had taken disproportionate, unnecessary or illegal action to curb the pandemic.

International Idea said the pandemic has put pressure on democracy for Europe and in some countries where democratic principles were already under threat, it provided governments an excuse to further undermine democracy. Europe’s non-democratic governments have already intensified very repressive practices. It identified Azerbaijan, Belarus, Russia and Turkey. Sam van der Stock, head of Program Regional Europe, believes the pandemic has exacerbated an already existing rift between high-performing democracies in Western Europe and vulnerable counterparts in Central and Eastern Europe. And this division will continue to challenge the unity of Europe, as it also faces greater external pressure from non-democratic superpowers. But its increased democratic isolation also creates opportunities for greater integration and cooperation, as Europe is forced to recognize the value of democracy as its core.

China’s influence, combined with its own deep autocracy, also threatens the legitimacy of the democratic model, the report said.

In Africa, the decline of democracy has undermined notable progress across the continent over the past three decades. The pandemic has put pressure on governments to respond to concerns about governance, rights and social inequality. The report also noted that half of the democracies in the US have suffered democratic erosion, with significant declines in Bolivia, Brazil, Colombia, El Salvador and the United States.

International Idea, in its major report on the state of democracy, said that the number of democracies retreating has doubled in the past decade. The United States, Hungary, Poland and Slovenia are specifically mentioned in this report. The Swedish-based body said the situation was getting worse even in countries that are not democratic. Autocratic regimes have become even more brazen in their repression, free speech has been banned and the rule of law is undermined, the voice of the people is being suppressed.

The report said that the two years since our last report have not been good for democracy, and this achievement was achieved when democracy became the dominant form of governance, now hanging in the balance as before. Overall, the report claimed that in 2020, the number of countries moving in an authoritarian direction exceeds those moving in a democratic direction. The world has lost at least four democracies in the past two years either through flawed elections or by military coups, the report said. It also referred to military coups in Chad, Guinea, Mali and Sudan.

More than 80 countries have seen protests and harsh civil action, despite government restrictions, during the pandemic, the report said. These include Cuba, Eswatini, formerly known as Swaziland, Myanmar and Sudan. Pro-democracy movements have faced repression in Belarus.

The report came ahead of US President Joe Biden’s December 9-10 virtual “Summit for Democracy”, which aims to gather leaders from government, civil society and the private sector, with Biden calling for a global fight against rising autocratic forces. Shown as faceoff.

In relation to Asia, International Idea said Afghanistan, Hong Kong and Myanmar have faced “a wave of rising authoritarianism”. Fighting Taliban captured gunpowder and gunpoint in Afghanistan. After the Taliban occupation, many pictures that shame humanity came in front of the world. But the humanity of the world remained silent and even today the women children there are forced to live a life full of disgrace and scarcity. Democratic erosion has also been found in India, Philippines and Sri Lanka.

In the recent days, the lobbying of violence in the special Parliament of Religions held in Haridwar, Uttarakhand, the struggle to advocate for a particular nation, controversial speech, and the narrow thinking of telling the Indian Constitution wrong has not only hurt the world’s largest democracy. But he has also insulted all the martyrs who sacrificed their lives in the freedom of India. Business in the name of religion and politics of hatred is not proper for a democratic country and religion.

While talking to NDTV news channel, Pooja Shakun tried to misrepresent the constitution of the country. And recommended Indians to pray to Nathuram Godse, the assassin of Mahatma Gandhi. In the year 2019, Pooja Shakun came into the limelight when she shot at the effigy of Mahatma Gandhi. They had also raised slogans in praise of Nathuram Godse, the killer of Bapu. Where does the courage to disturb harmony and incite violence among so-called religious leaders come from. Which no religion allows. Such people defame the holy Hindu religion as well as shame the country. Whereas International Idea Secretary General Kevin Casas-Zamora said in a statement that it is time for democracies to be courageous, innovate and revitalize themselves.