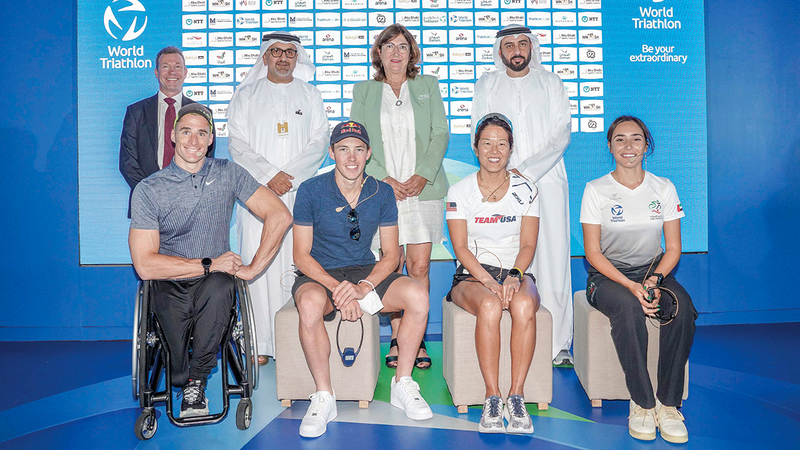 The World Triathlon Championship (Abu Dhabi 2022), sponsored by Daman, and organized by the Abu Dhabi Sports Council, in cooperation with the International Triathlon Federation, begins today on Yas Island, and will last for three days.

The finals witness a large participation of triathlon fans and fans at the local, regional and global levels.

The organizing committee of the tournament held a press conference at the headquarters of the Abu Dhabi Sports Council, in the presence of the Secretary-General of the Abu Dhabi Sports Council, Aref Al-Awani, the President of the International Triathlon Federation, a member of the International Olympic Committee, Marisol Casado, the President of the Emirates Triathlon Federation, Khaled Al-Fahim, and the head of commercial affairs in the National Health Insurance Company (Daman). Stuart Leatherby.

During the press conference, Aref Al-Awani said: “We are pleased to host this prestigious event, which is being held for the first time in the Middle East and North Africa region.

For her part, Marisol Casado said: “The event is witnessing great anticipation, and attracts huge numbers of people wishing to participate in its various categories that include elite, age group and Para Triathlon. Abu Dhabi will be the ideal stop for the end of the season. We are excited to crown many champions here on Yas Island, and we thank Majlis Abu Dhabi Sports, the Emirates Triathlon Federation, and Daman Company for their assistance and support in organizing an event of this large size.

The press conference was attended by a number of the most prominent triathlon players, including New Zealand’s Hayden Wilde, the first seed, Getzie Platt, the Paralympic champion, and Sharon Byun, in addition to Hana Al-Nabulsi, the UAE national team player.