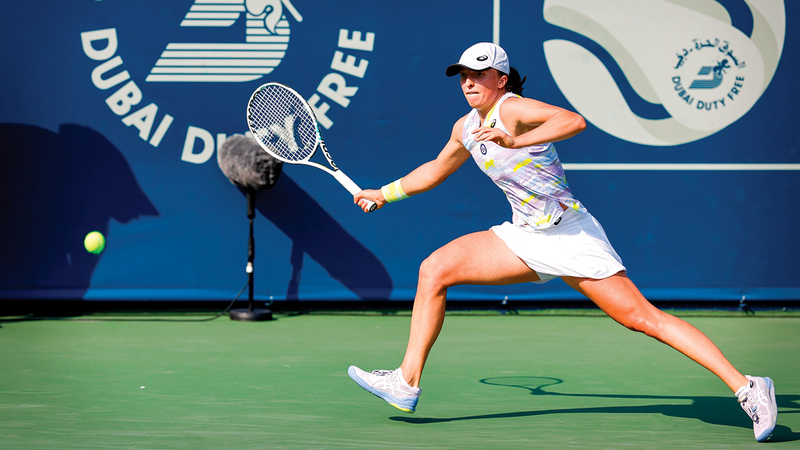 The Dubai Duty Free Tennis Championships revealed the participation of seven players from the top 10 seeds in the 23rd edition of the women’s category (tennis professionals 1000 points), which will be held in Dubai from February 19 to 25.

The list is topped by world number one Iga Chivontec and Arab star Anas Jaber, number two in the world, and Jessica Bigla and Caroline Garcia, ranked third and fourth in the world, in addition to the return of Latvian Jelena Ostapenko to defend her title that she achieved last year. Fans also get the chance to enjoy the performances of 14 of the 20 top seeded players.

Świentek, the 21-year-old Polish player, concluded the year 2022 at the top of the ranking of professional tennis players; She won two Grand Slam titles at the French Open and the US Open, while Anas, the famous Tunisian player she competed with last year on the courts of Flushing Meadows, became the first Arab player to reach the final of one of the four Grand Slams last year when she qualified for the match The final of the Wimbledon Championships and the US Open, and she is the first African player in history to achieve second place in the ranking of professional tennis players.

Colm McLoughlin, Executive Vice Chairman and CEO of Dubai Duty Free, said: “We aim every year to take advantage of previous achievements and attract the best players in the Dubai Duty Free Tennis Championships. With the participation of 14 players from the top 20, this year’s tournament will be one of the most distinguished tournaments ever, and will provide a unique experience for fans, players, media and stakeholders.

The list of players participating in the tournaments also includes the runner-up of last year’s tournament in Dubai, Veronika Kudermitova, ranked ninth in the world, ranked eighth in the world, Daria Kasatkina, Madison Keys, who qualified for the US Open final in 2017, and the Spanish resident in Dubai, Paula Badusa, along with Beatrice Haddad Maya, ranked The first in Brazil.

Ticket prices start at AED 55 on the website dubaidutyfreetennischampionships.comIt is also available through the box office at the Dubai Duty Free Tennis Stadium, starting from February 9, daily from 9 am to 9 pm.

The 31st edition of the Dubai Duty Free Tennis Championships for men (ATP Tour 500 points) will be held from February 26 to March 4.