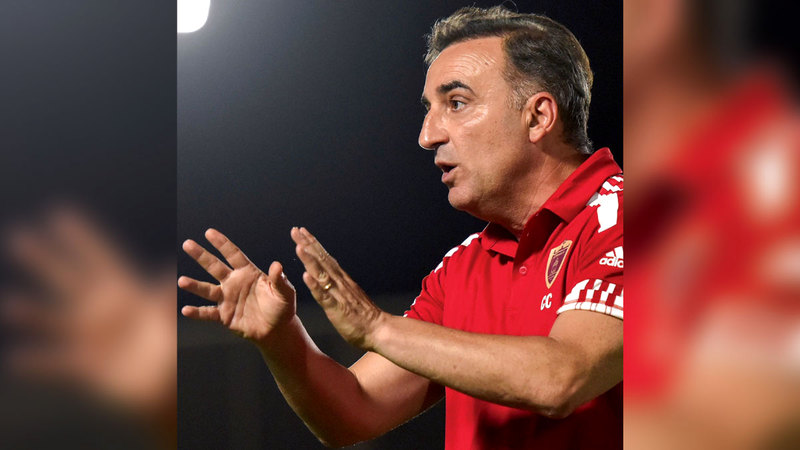 The third worst start in the history of the Al-Wahda team’s participation in the professional era hastened by obtaining only four points, after four rounds, by removing the head of the team’s coach, the Portuguese Carlos Carvalhal from his position, and using the services of the Spaniard Manuel Jimenez, however, the dismissal of Carvalhal was not the fastest in the history of dismissals. For coaches in the ADNOC Professional Football League, as recent history preserves that Al-Wasl management dismissed its Romanian coach Laurent Rejkamp after the end of the first round of the competition in the 2020-2021 season, which was the dismissal that was the first episode of a series that ended with 10 clubs dispensing their coaches during that season.

The results of the first three rounds achieved by “Al Annabi” had muddied the atmosphere between the unit’s coach and team officials, and the separation was the choice, as “Al Annabi” did not provide any evidence to the fans of his ability to be the “dark horse”, and to end 12 years of waiting and anticipation. To achieve the league title absent from its treasuries since obtaining it in the 2009-2010 season, the state of uncertainty dominated the masses, and it became clear the team’s suffering during the meetings, with its 2-2 draw with Al Wasl, its loss at its home by Ittihad Kalba 0-1, and its defeat against Shabab Al-Ahly 1-2.

The decision to dispense with Portuguese coach Carvalhal was inevitable, which was shown by the evidence, because the dismissal came after the team tasted victory for the first time in the season, and not after a negative result, and it was a brave decision as well, especially since “Al Annabi” had strengthened its ranks With high-caliber deals during the current summer transfer period, he seemed ready to fulfill the long-awaited dream of winning the league title, but the catastrophic start with a point in the first three rounds rushed the coach’s head, and the use of Spaniard Manuel Jimenez for the second time in three years.

Over the course of the last season 2021-2022, the clubs overthrew nine coaches, while only four coaches continue with their teams so far, led by Ukrainian Sergey Rebrov with Al Ain, Dutch Marcel Kaiser with Al Jazira, Romanian Daniel Issaila with Bani Yas, Serbian Goran Tovejdzic with Ajman, and she lives These four clubs are in a state of technical stability, but to varying degrees.

The 2019-2020 season, which was later canceled due to the outbreak of the Corona virus, was the most terrifying for coaches, as it witnessed the dismissal of four of them after only three rounds as the highest outcome in the history of the professional era in the first three rounds, and the termination included the Dutch unit coach Maurice Stein, and the Dutch Al Jazeera coach. Jurgen Strebel, the Brazilian coach of Al-Nasr Caio Zanardi, in addition to the Italian Kalba Federation coach Viviani, before fate saved the rest after canceling the season before its end.

It is expected that the clubs that have entered the “vortex of doubt” due to its results will be required to study the technical change in Al Wahda Club, to monitor the positive reaction of the change that may automatically push them to dispense with their coaches, in the hope of correcting the course quickly so that they do not find themselves performing the duty by fighting the rest. From matches per season as a takeaway only.

The specter of dismissal hovers around more than one coach, including the German Thorsten Fink, who does not provide the “Brigadier” under his leadership, the performance expected of him, as “Blue” collected only five points out of 12 and lost in the last round the “Bur Dubai” derby against its neighbor, Al-Nasr. Bani Yas is also presenting the performance expected of him with his Romanian coach Daniel Isila, and Abdulaziz Al-Anbari does not live his best days with Khorfakkan, nor does Dibba pass under the leadership of his Serbian coach Zoran Popovic at his best.

The new “Al Annabi” coach is awaiting five difficult confrontations of heavy caliber, during the month of October, starting with the victory meeting next Saturday in the fifth round of the league, and then a guest of Al Ain on October 15, to meet the star-studded Sharjah led by Romanian coach Olario Cosmin in the Cup final. The head of state, who was postponed from last season and scheduled to be held on the 21st at Hazza bin Zayed Stadium, and then heads to face Al Dhafra on the 25th, to conclude the month with a renewed meeting with Sharjah in the “smiling emirate”.

The “Corona season” witnessed the dismissal of four coaches after only three rounds.