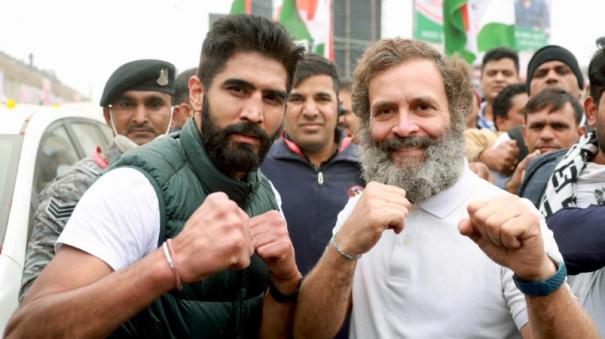 Then it resumed on January 3 after a gap of 9 days. Entering UP, Rahul passed through its western districts in just 3 days. The state is prominent in national politics and includes her former constituency Amethi and Sonia’s Raebareli. Thus, if the opposition parties including Akhilesh Singh Yadav’s Samajwadi and Mayawati’s Bahujan Samaj participate, it was planned to hold a yatra for more days in UP. But as opposition parties did not come forward to support Rahul completed the pilgrimage in 3 days.

However, Rahul was welcomed by farmers and Muslims in UP. Rahul has benefited from the presence of both these groups in the west. He regularly criticizes the BJP and its parent organization, the RSS, in Yatra meetings. Thus, Maulanas and their students from Madrasahs of the area along with Muslim women participated in large numbers in Rahul’s meeting.

Rahul’s yatra after Baghpat has re-entered Haryana. From here it will reach Jammu and Kashmir via Punjab. In UP, Rahul was joined by Congress workers from his former constituency Amethi and mother Sonia’s Raebareli. They urged Rahul to contest again in 2024 Lok Sabha.