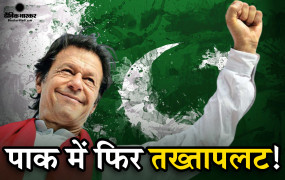 In a talk show, a senior PTI leader Ishaq Khaqwani, while giving information about this secret meeting, said that a few days ago President Arif Alvi had made Imran Khan and Bajwa meet at Rashtrapati Bhavan itself.

Earlier, former Pakistan Prime Minister Imran Khan had demanded extension of Bajwa’s tenure till the general elections are held. Praising President Arif Alvi, Khakwani said that the President is a sensible leader. Imran Khan and Arif Alvi have known each other for over a decade, the two even worked together in 2018. At that time Dr. Alvi was his secretary. Alvi wants to serve the country by joining Imran Khan’s cabinet. Khakwani says that Alvi has been a supporter of Imran Khan for nearly a decade and a half.