There may be more cases of monkeypox in the US: CDC chief 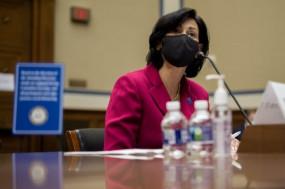 Digital Desk, Washington. Rochelle Valensky, director of the US Centers for Disease Control and Prevention (CDC), said that there could be more cases of monkeypox in the country. “Based on the tests being conducted and the information we are receiving, we anticipate that there will be more cases in the coming days,” Xinhua news agency quoted Wallensky as saying in The Washington Post.

Valensky said the CDC doesn’t have any specific estimates at this time about how serious the situation may be. “I don’t think we have any stable estimates right now,” the CDC chief said. But he pointed out that for the first time in America, monkeypox infection has been detected in two children on Friday.

The CDC said in a statement that the two cases are unrelated and likely the result of domestic spread. Valensky said infected children are being treated. The health of both is improving. The people with whom these children had contact are being monitored by the CDC. According to CDC data, the US has so far confirmed more than 2,800 monkeypox/orthopoxvirus cases.

Ashish Jha, the COVID-19 response coordinator at the White House, said the government has distributed 300,000 doses of a monkeypox vaccine and is working to expedite the shipment of 786,000 more doses from Denmark. He said there are already enough vaccines to deliver the first vaccine dose to more than half the eligible population in New York City and more than 70 percent of the eligible population in Washington DC. Monkeypox is a rare viral disease that is usually spread through body fluids, nasal droplets, and other contaminants.