There was a case: why the prosecutors did not like the NKVD 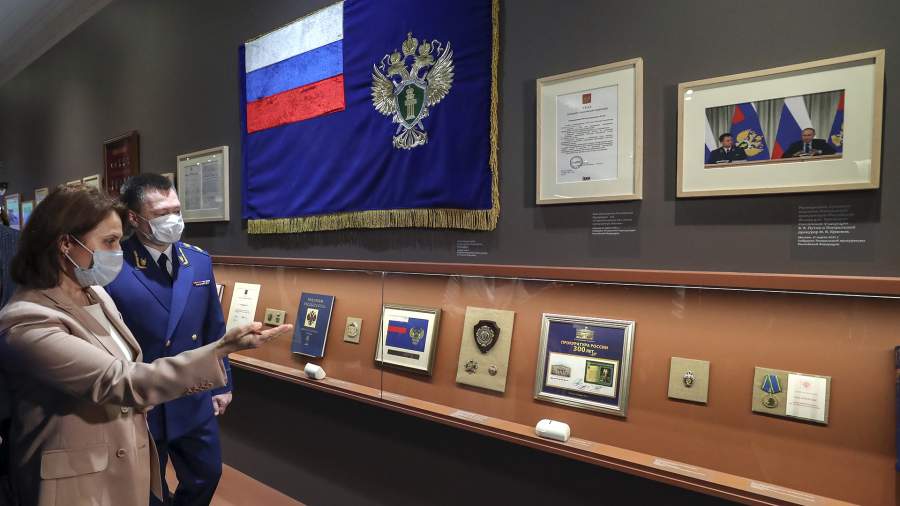 At the State Museum of Contemporary History of Russia 27th of December an exhibition dedicated to the 300th anniversary of the founding of the prosecutor’s office was opened. The date will be celebrated at the beginning of next year: on January 12, 1722, Peter I issued a decree on the post of prosecutor general, and on January 18, he appointed Pavel Yaguzhinsky as the first prosecutor general.… Where are rare exhibits of French origin at the exhibition, how the poet-prosecutor Gabriel Derzhavin fought against evil, for which Soviet prosecutors did not like the NKVD officers – in unique documents and artifacts that can be seen in the museum until the end of March.

– The history of the Russian prosecutor’s office has many bright events. Many of them are reflected in the exhibits. These are materials and original documents of the activities of real prosecutors., – said, opening the exhibition, the Prosecutor General of Russia Igor Krasnov… He drew particular attention of the audience to the luxurious uniforms of prosecutors generals of the mid-19th century, embroidered with gold – these are originals, like all the exhibits on display.

The exhibition “300 Years Guarding the Law: Persons, Events, Documents” was implemented by the ANO “Center for Educational Projects” with the assistance of the General Prosecutor’s Office, the Russian Historical Society and the Ministry of Culture. Izvestia asked the head of the exhibition and the author of the script exposition, historian and writer Alexander Zvyagintsev to acquaint with the most valuable, in his opinion, exhibits. He headed towards the very beginning of the exposition.

“This is a great rarity,” Zvyagintsev pointed to a large bronze medal. – It was minted in honor of the visit of Peter I to France. I bought it in Paris at an auction… And this book is the first Russian law dictionary, a unique first edition of 1788.

The medal bears a portrait of the tsar and an inscription in Latin: “Peter Alekseevich, great tsar, emperor of Russia.” In 1717, Peter stopped in Paris on a tour of Western Europe. In the mint, the Russian tsar was presented with a gold commemorative medal, minted in his presence. Several bronze copies were made at the same time. One of them is now available for contemplation.

The French voyage of the future emperor is directly related to the birth of the Russian prosecutor’s office. On July 19, 1717, Peter I attended a meeting of the Grand Chamber of the Paris Parliament and listened to the speech of the Deputy Prosecutor General, Advocate General Guillaume de Lamoignon. “The personally seen spectacle of the royal commissioner before the highest court, surrounded by general respect and invested with authority” made a “strong impression” on Peter I, – wrote about this in the monograph of 1889 Nikolai Muravyov, the future Prosecutor General and Minister of Justice.

In May 1721, the controller of the Admiralty Board Konon Zotov prepared a draft for the tsar entitled “A copy of a letter to my brother about the auditor general, which is now called the prosecutor general in France, with notes and examples of the current state of affairs in Great Russia.” It was in the text of Zotov that for the first time it was proposed to create the post of “a nationwide overseer or state solicitor.” “The powers of the ‘state solicitor’ were fragmentarily reminiscent of the competence of the Attorney General of the Paris Parliament,” wrote the leading researcher of the history of Russian law, Professor Dmitry Serov.

On January 12, 1722, the Russian emperor drew up the famous “decree on the sovereign’s ocean”, on January 18, he appointed his faithful companion, famous for incorruptibility, Pavel Yaguzhinsky, to a new position, and on January 27 he issued the law “Office of the Prosecutor General.” According to the historian Serov, it was based on Konon Zotov’s “French” project. Although ours differed from the French model. In Russia, prosecutors supervised the rule of law, and in the kingdom of Louis XV, they also carried out criminal prosecution. But after the judicial reform of Alexander II in the 1860s, the prosecutor’s office also got the “criminal” function.

There are no documents at the exhibition signed by the first Prosecutor General Yaguzhinsky. But there is a Named Decree on its appointment – the same one, on January 18, 1722. And a report from the subordinate prosecutor to Yaguzhinsky, dated 1724, about the absence of officials.

– It was Tsar Peter who was the first of the rulers of Russia to use the idea of ​​the common good. The implementation of this idea assumed the eradication of corruption and nepotism, therefore, by order of Peter, the positions of prosecutors were established in each collegium and government council.– said at the opening of the exhibition Director of the Foreign Intelligence Service and Chairman of the Russian Historical Society Sergei Naryshkin.

Tsarist prosecutors more than once acted as intercessors. The “old man Derzhavin,” who “noticed and, going down to the grave, blessed” Alexander Pushkin’s classmates, was also the prosecutor general. Gabriel Derzhavin did not hold this position for long – only a year at the very beginning of the 19th century. At the exhibition you can see the Decree of Alexander I on his appointment as Minister of Justice (at one time the powers of the Minister and the Prosecutor General were combined) and read a touching facsimile of the poet-lawyer – about “the merciless covetous man Tarabrovsky, an officer of the Preobrazhensky regiment”, who let the family of a colleague go around the world.

The exposition contains letters concerning the mitigation of punishment for the Decembrists. There is an indignant 1919 report from the Irkutsk prosecutor to the Minister of Justice of the Kolchak government – about extrajudicial executions during the Civil War.

“For three centuries, the prosecutor’s office has changed its name more than once, but the mission has remained the same – to ensure the rule of law, to protect and defend public interests,” said Sergei Naryshkin.

The exhibition features amazing evidence of the Soviet era. In 1931, the Prosecutor of the RSFSR Andrei Vyshinsky sent a circular letter to the prosecutors of the autonomous republics, in which, with figures in hand, he argued that they were going too far – they were repressing too many officials, almost as many as there are kulaks, although the latter, according to Vyshinsky, are much more numerous. Therefore, there is an unjust violation of proportion.

October 28, 1939 hThe Lenin of the Politburo of the Central Committee of the All-Union Communist Party of Bolsheviks, Andrei Zhdanov, received a letter with the following content: “By the decision of the Central Committee of October 17, 1938, it was ordered to eradicate violations of the law, which led to the massive condemnation of innocent honest Soviet people … these people are not just a few, but tens and hundreds of thousands … are in camps and prisons. ” The authors demanded “the immediate correction of the criminal line of the scoundrel Yezhov and his criminal clique, which literally terrorized the Soviet people.”

The letter was written by employees of the USSR Prosecutor’s Office. Then they complained about Vyshinsky’s replacement at the post of General Prosecutor of the Union, Mikhail Pankratyev, who “failed to enforce the decision of the Central Committee,” and asked to correct the personnel error.

At the end of the letter, the prosecutors attacked the all-powerful NKVD. “We old workers have always been amazed by the attitude of the party and government leadership to the apparatus of the prosecutor’s office, this sharpest weapon of the dictatorship of the proletariat … The prosecutor in the apparatus of the USSR prosecutor’s office, who worked honestly for 10-15 years, receives 650-700 rubles, and the semi-literate youth who was newly admitted to the NKVD apparatus receives over 1200-1500 rubles. Where is the logic, why is this wrong line being carried out? ”, The lawyers ask.

The most important figure in the history of the domestic prosecutor’s office was Roman Rudenko – in the position of the Prosecutor General of the Ukrainian USSR, he headed the Soviet prosecution at the Nuremberg trials in 1945-1946. And at the beginning of the war, he asked for a transfer from the USSR Prosecutor’s Office, where he served at that time. At the exhibition you can see a document from the personal archive of the family – the report of July 9, 1941, the head of the department of the USSR prosecutor’s office for the supervision of the police, Roman Rudenko, to the prosecutor of the USSR, Sergei Safonov, with a request to summon him to the military prosecutor’s office and send him to the front line. In the summer of 1953, he will become the USSR Prosecutor General and will hold this position for the longest time – 28 years.

The “criminal lines” were to be “straightened” by the new generations of Russian prosecutors. The General Prosecutor’s Office has provided for the exposition unique documents from its archives of modern times. For example, a telegram to Alexander Solzhenitsyn in Vermont on September 17, 1991. “Since there is no evidence that you have committed any crimes, the criminal case was dropped for lack of corpus delicti. I ask you to accept from me my apologies for the illegal actions of former workers of the Prosecutor’s Office of the USSR against you, ”wrote Prosecutor General Nikolai Trubin.

For visitors who do not have the patience to read documents, multimedia carriers work – on many screens you can “flip through the pages” of the exposure. As the Minister of Culture of Russia Olga Lyubimova noted, the exhibition “300 years on guard of the law: persons, events, documents” is a modern museum space in an incredibly beautiful museum decoration ”.

– We wondered how to make such an exhibition interesting for everyone. Thanks to multimedia, it will be interesting for young people. It is important that it be understandable and accessible to a wide variety of visitors, the minister said.

The exhibition at the State Museum of Contemporary History of Russia in Moscow on Tverskaya will run until the end of March… Enough time to view its 320 exhibits, many of which briefly left their permanent vaults.