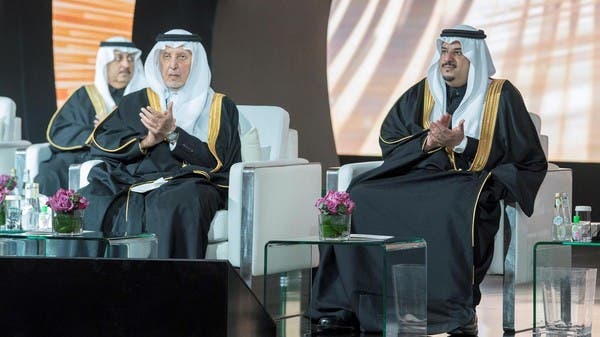 Under the patronage of the Custodian of the Two Holy Mosques, King Salman bin Abdulaziz Al Saud, Prince Muhammad bin Abdulrahman bin Abdulaziz, Acting Governor of Riyadh, attended a ceremony honoring the winners of the King Faisal International Prize for the years 2020 and 2021, at the Prince Sultan Grand Hall in Al Faisaliah Hotel.

During the ceremony, the Governor of the Makkah Al-Mukarramah region, Khaled Al-Faisal, gave a speech in which he said: “What do I begin with my words? What do I engraved with my pen? How do I weigh my joy and my pain? Evil is rampant and security is enlightened. Knowledge is adorned, here is a king who has honored knowledge and the knowledge of the greatest king, and peace be upon him.”

At the ceremony held yesterday evening, the Secretary-General of the King Faisal International Prize, Dr. Abdulaziz Al-Sabeel, presented the winners of the award’s branches, as the Service to Islam Award for the year 2020 was awarded to the Holy Mecca Document, which is a historical constitution for establishing the values ​​of coexistence and peace among followers of religions and cultures, and he won the Service to Islam Award. For the year 2021, founder and president of Sakhr Mohammed bin Abdul Rahman Al-Sharekh Company, who had a prominent role in supporting and instilling the spirit of research, innovation and innovation to preserve Islamic heritage through modern technology.

On the topic “Islamic Heritage of Jerusalem”, which was chosen by the King Faisal Prize as a topic for the “Islamic Studies” branch for the year 2020, it was won by Dr. Muhammad Hashim Ghosheh, who contributed more than 150 research and studies on Jerusalem and its Arab and Islamic heritage, and authored 37 historical and documentary books that dealt with historical and intellectual aspects. The architecture and heritage of the city of Jerusalem, and among his most prominent works is the Encyclopedia of Palestine in English, while the award for the year 2021, whose theme was “Waqf in Islam”, was withheld.

In the Arabic language and literature branch, the prize for the year 2020 was awarded on the subject of “Arabic Linguistic Studies in Other Languages” to Professor Michael Carter, an Australian national whose work spanned fifty years, contributed to the study of the Arabic grammatical heritage and provided the most important references for linguistic research outside the Arab world, while the prize was awarded in 2021. On the subject of “The New Rhetoric” by Professor Dr. Muhammad Michbal, Professor of Rhetoric and Literary Criticism at the Faculty of Arts at Abdelmalek Al-Saadi University in Morocco, most of his works, which are characterized by depth, novelty and originality, are related to the subject of the award, seeking to link rhetorical research to the fields of literature, language and communication.

In the field of medicine, the 2020 prize was awarded to Dr. Stuart Orkin, a hematologist, oncologist and geneticist, for the topic “Hemoglobin Diseases.” His pioneering discoveries in the genetic bases of blood disorders led to treatments for inherited blood diseases and revolutionized the understanding of how such diseases occur.

In 2021, two recipients of the Medicine Prize for excellence in their research on “Regenerative Medicine in Neurological Conditions” were awarded to Professor Robin James Franklin, who works as a stem cell specialist at the Wellcome Trust for Medical Research at the Cambridge Stem Cell Institute, and directs the Cambridge Center for the Reform Society. Neuromyelination in the United Kingdom, and the second co-winner is Dr. Stephen Mark Streetmatter, Prof. Vincent Coates Chair in Neurology, and Founding Director of the Cellular Neuroscience Program at Yale University. Professor Franklin has made pioneering and fundamental contributions to the biology of myelin, which have led to important applications in Clinical neuroscience, particularly MS, has become a world leader in “remyelination” in biology, and Professor Stretmatter has outstanding achievements in the field of neurological repair, the molecular understanding of axonal growth failure, and the difficulty of recovery after spinal cord injuries.

The King Faisal Prize in “Sciences” for the year 2020 was won by Professor Xiao Dongwang, Director of the Institute of Biological Sciences in Beijing, in the subject of “Biology”, and Professor Stuart Parkin, Director of the Max Planck Institute for Microphysics in Halle, Germany, is the winner for 2021 in the subject “Biology.” Physics”, Professor Xiao Dong Wang made unique achievements that led to a change in the understanding of the nature of the work and death of the adult cell, which contributed to the development of treatments and drugs that mimic catalysts to stop the deterioration of cells in the resistance of life-threatening diseases, and Professor Stuart Parkin has made his innovations and discoveries in the field of circulation Electronics is a revolution in computers, which has increased the storage capacity of magnetic drives by (1000) times, and his work has contributed to solving intractable problems that depend on rapid access to huge amounts of data through machine learning and artificial intelligence.

It is noteworthy that since 1979, the King Faisal International Prize has honored (275) winners from 43 different nationalities who have contributed to the service of Islam, Muslims and humanity as a whole, and have presented distinguished research, and made unique discoveries and exceptional innovations in the fields of science, medicine, Islamic studies, Arabic language and literature.