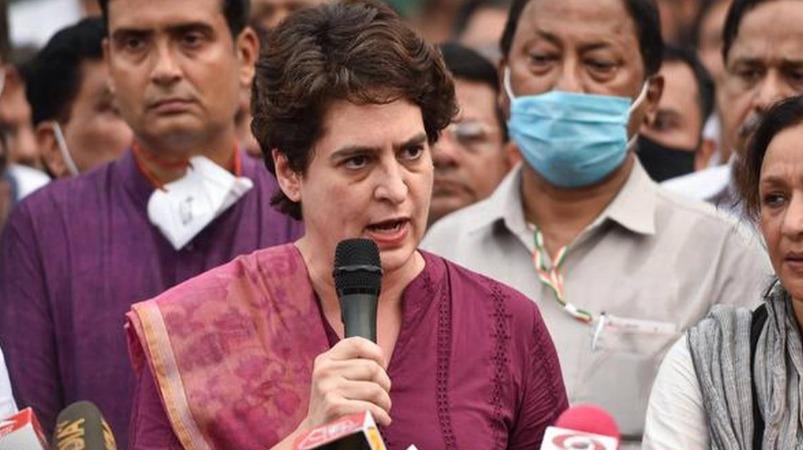 Arrested on his way to Agra to meet the family of a janitor who died in police custody. Priyanka Gandhi Said.

A complaint was lodged at the Agra police station that 25 lakh rupees had gone missing from a warehouse near Agra in Uttar Pradesh on October 17. Police arrested cleaner Arun Valmiki in the case. The arrested cleaning worker died in police custody last night.

Congress General Secretary to visit and offer condolences to the family of the deceased in police custody Priyanka Gandhi His car was parked at the first toll booth on the Lucknow-Agra Expressway when he left this morning. Priyanka was arrested.

The police officer who detained Priyanka told her, “You are not allowed, we cannot allow you. Section 144 is imposed in the area so they are arrested and taken to the police station. They are not allowed to go to Agra either.”

Responding to this, Priyanka said, “Whenever I try to go anywhere other than the party office, they (the administration) try to stop me … their actions cause a lot of inconvenience to the public.”

He said in a series of Twitter posts today regarding the death of the cleaning worker:

Someone in police custody is beaten to death, where is the justice? The incident in which Arun Valmiki died in Agra police custody is reprehensible. On the day of Valmiki Jayanti, U.P. The government has acted. High level investigation and action should be taken against the police and compensation should be made available to the victim’s family.

The family of cleaner Arun Valmiki, who died in police custody, is seeking justice. I would love to meet that family and say consolation. If I go to meet the victims UP. Why is the government afraid? Why am I blocked? Today God Valmiki Jayanti. Prime Minister Modi spoke loudly about the Buddha. But it is also a blow to his message. “

“Rs. A cleaning worker arrested by the police in a case of missing Rs 25 lakh has pleaded guilty to stealing during a police investigation.

Police also recovered Rs 15 lakh from his house, where he fell ill while in custody. Police and his family rushed him to the hospital. By then the doctor had declared him dead.

An FIR has been lodged against the cleaner’s family on suspicion of murder and further action will be taken according to the postmortem report.