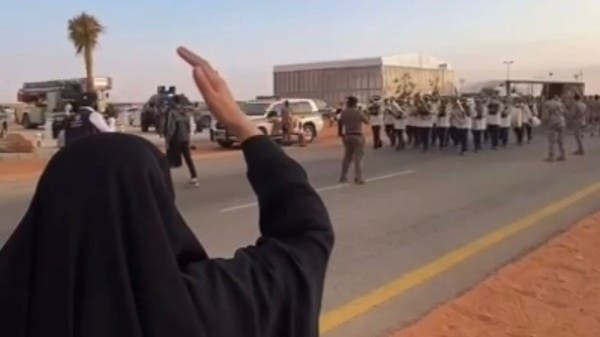 A woman interacted with the military parade, which was presented by Border Guard personnel participating in the Ministry of Interior exhibition at the King Abdulaziz Camel Festival, and a video clip widely circulated on social media showed the moment a woman stood on a road and waved her hand in admiration and appreciation for their role in preserving the nation’s borders. And with her children.

The video was admired by the pioneers of social networking sites, praising her natural, non-artificial reaction, when she saw the military parade, noting that she represented everyone.

Al-Arabiya.net met and communicated with Mrs. Umm Adel Al-Enezi, a resident of the Riyadh region, who said: I am proud and excited with the security men.. May God protect them, guide them, and direct their steps.

Umm Adel confirmed that she is in love with the dear homeland and loves all its components, its civilization, culture and heritage, the sea and the desert, its modern renaissance.