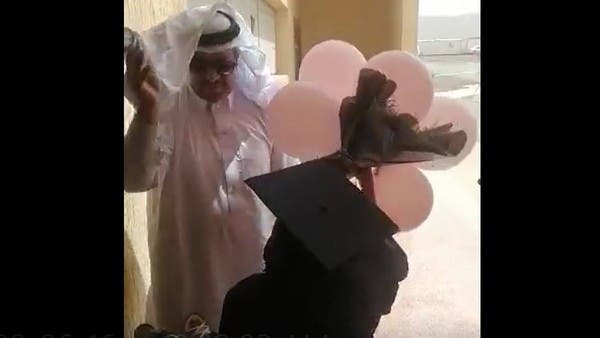 Feelings were dancing with joy in the Al-Mazroui family, when she went to Jeddah University, to be greeted by their daughter, Shatha Al-Mazroui, with dances and chants that express their happiness at her graduation despite her disability, while social media activists circulated a video clip expressing their joy.

In an interview with Al-Arabiya.net, the graduate, Shatha, said: “I did not expect the presence of the family, especially my grandfather, who came to participate despite his illness, in addition to my father and all members of my family who came to congratulate me and share the joy of my graduation from the College of Judicial and Judicial Studies, Department of Public Law, with the second honor.” .

She emphasized that the road was difficult, especially because many public education schools did not accept students with disabilities, while this problem is less in universities, which made her take advantage of the opportunity with perseverance and excellence until she graduated. Shatha has a talent for media in addition to her proficiency in the art of make-up.

Shatha describes her feelings, saying: “Success was not easy, as the obstacles were many in front of me, until they intensified and I thought that they would not go away, but by the grace of God and then with the cooperation of the parents and those around me, I was able to face all the problems one by one, and I hope to see greater interest in people with disabilities in All sectors, the labor market and education, especially since I have the will to continue working and studying, the sky is the ceiling of my ambition, and representing my country in international forums is my goal.”