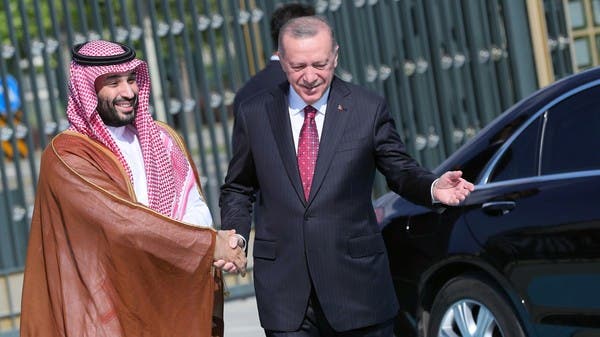 With Turkish melodies and rhythm, the song “This Saudi is above above” was heard during an official dinner hosted by Turkish President Recep Tayyip Erdogan yesterday evening, Wednesday, in honor of Saudi Crown Prince Mohammed bin Salman during his visit to Ankara.

A musical expression with Saudi words, embodying the celebration of the visit of His Highness the Emir #Mohammed bin Salman And that was during the dinner hosted by His Excellency Turkish President Recep Tayyip Erdogan.
Affection and brotherhood were, and will continue to be, evidence of the ties that bind the Saudi and Turkish peoples, reinforced by the determination of the two leaderships to move forward for the good 🇹🇷🇸🇦 pic.twitter.com/oIyHpjifCa

The clips of that song have spread widely over the past hours on Twitter. Many Saudi tweeters shared a video showing the crown prince sitting at the dinner table accompanied by the Turkish president, in addition to the Saudi delegation accompanying Prince Mohammed bin Salman and a number of senior Turkish leaders.

While a Turkish band sang “This Saudi is over the top” during the dinner.

It is noteworthy that the song “This Saudi” enjoys a high audience in the Kingdom, the Gulf countries and the Arab countries, as it is considered one of the patriotic songs written by the Saudi poet Ahmed Al-Juwaidi, composed and sung by the artist Fahd Bin Fasla.

As for the popular singer Fahd Bin Fasla, he is also very popular in the Kingdom and the Gulf region in a short period, especially after he followed the color of singing known as “Sheilat”.

It is noteworthy that Prince Mohammed bin Salman had arrived yesterday in the Turkish capital, on his third and final leg of a tour in the region, which started on Monday from Egypt, then Jordan, to end in Ankara, where he was received by the Turkish President.

The two sides held bilateral talks, which included many political, economic, commercial and tourism fields, among others.

They also discussed increasing cooperation between Riyadh and Ankara in various fields from trade to tourism, and from health to defense industries, and several agreements were signed between the two countries.