Those involved in the struggle have no place in the military; We will not withdraw the Agni Path project: Central Government 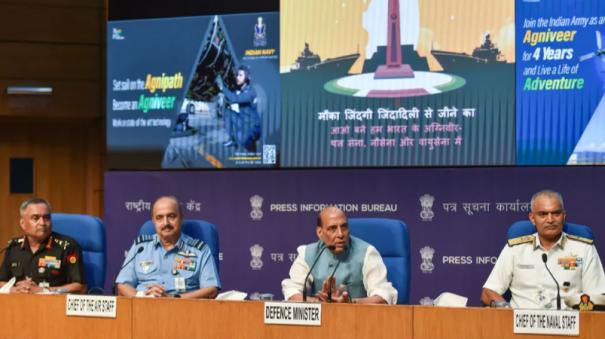 New Delhi: The Federal Department of Defense has announced that those involved in the struggle against the ‘Agni Path’ project have no place in the military and will not withdraw the project.

The Central Government has announced the ‘Agnipathai’ project, which will serve for 4 years in the Army’s three forces. The struggle against this plan has intensified across the country. Youths in various states, including Bihar, have been protesting to abandon the project. There have also been incidents of violence, including the burning of trains.

In this context, Lieutenant General Anil Puri, Additional Secretary, Department of Military Affairs, gave an interview to reporters in Delhi yesterday. That’s what he said then.

The Agni Path project has the potential to attract a large number of young people to the troop each year. The project is based on recommendations that have been emphasized over the years.

Offers announced by various departments and ministries for Agni soldiers are pre-planned. Nothing was announced due to the fight.

Over the next 4 to 5 years, the selection of players will increase from 50 thousand to 60 thousand. Then rising from 90 thousand to 1 lakh. 46 thousand people are being selected for the first phase to explore the project and strengthen the infrastructure.

The selection of Agni players will not last more than 46,000. It will go up to 1.25 lakh people in the future.

Rajnath Singh Advice: Meanwhile, Defense Minister Rajnath Singh yesterday held consultations with the three battalion commanders on the rising opposition to the Agni route project. Security sources said he had consulted with the youth on the steps needed to give up the struggle and the implementation of the plan.

24 First Recruitment: The Air Force announced yesterday that recruitment for the first Air Force under the Agni Path project will begin on the 24th.

A statement from the Air Force said: The first step is to start the online exam. The first badge players will join the service in December. Training for them will start from Dec. 30.

Others will be offered various benefits, including around Rs 11 lakh, at the end of the training. Thus stated in the report.

He added, “Naval firefighters will begin training on board the INS Chicla in Odisha from November 21 this year.

Women and men will be allowed this year. The Navy currently has 30 female officers. They have been working on the ship. Women will also be included through the Agni Path project. They will also be allowed to serve on the warship. ”

The 10 per cent reservation will be implemented in 16 PSUs, including the Coast Guard, civilian posts in the defense sector and the defense sector-based Hindustan Aeronautical Company (HAL), Bharat Electronics (BEL).

In order to implement these procedures, necessary amendments will be made in the relevant recruitment rules. For the above posts, the required age relaxations will also be provided, depending on the selection of Agni players.