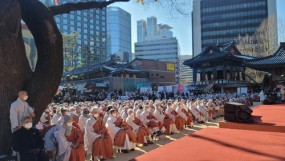 Temples located in national parks charge 3,000–4,000 per person in fees from all park visitors, whether they visit the temples or not. Temples argue that they are entitled to such fees because the money is used to look after temple property and private areas belonging to temples inside parks.

Friday’s rally, held at the Jogye Order’s headquarters in central Seoul, attracted attention as it came at a time when the presidential race was heating up amid speculation that anti-government sentiment among Buddhists was going against ruling party candidate Lee Jae-myung. can affect the possibilities.

This marked the first time in 28 years that the Jogye Order has organized a large rally of monks from across the country in the name of the National Conference of Buddhist Monks since the sect’s reformation rally in 1994. In a statement issued before the rally, the Jogye Order and participants called for President Moon’s apology, the enactment of laws against Buddhism and to curb religious prejudice, and measures to preserve the national heritage.