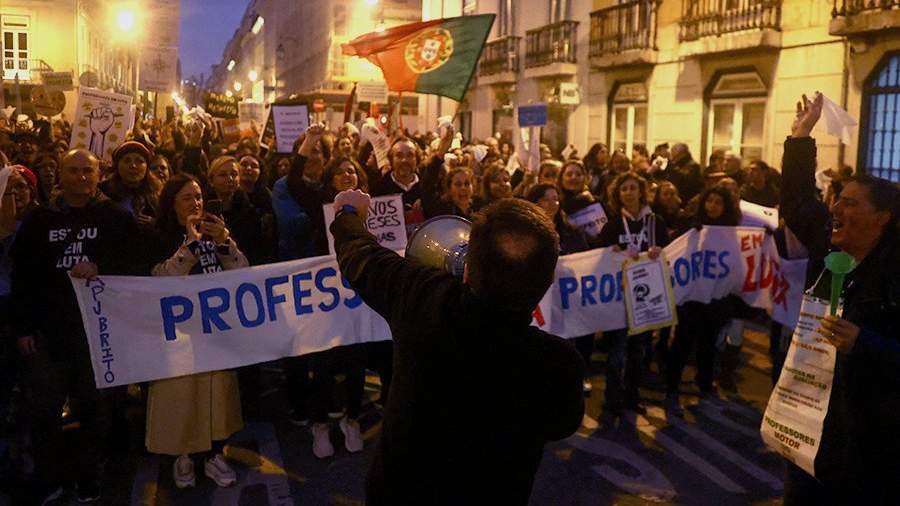 Tens of thousands of Portuguese teachers and school workers took to the streets of Lisbon, Portugal, demanding higher wages and better working conditions. One of the largest protests in recent years is reported by Reuters on January 14.

“Teachers deserve a fair salary because we have been working all our lives … we have never been corrupt and have never stolen like politicians, unfortunately,” said Maria Duarte, a 62-year-old history teacher, one of the protesters.

During a peaceful demonstration organized by the Union of All Educational Workers (STOP), protesters held banners and shouted slogans calling on Education Minister Joao Costa to step down.

According to the agency, the lowest paid teachers earn around €1,100 a month, and even upper-class teachers typically earn less than €2,000 a month. Protesters say current wages are too low, especially given the cost of living crisis.

On January 10, primary schools in Scotland closed for the whole day due to a teachers’ strike. They demanded a 10% wage increase.

Earlier, on November 24, almost all schools in Scotland were closed due to a national teachers’ strike. The action was the first nationwide strike by educators in Scotland since the 1980s. School employees demanded a 10% increase in salaries from the authorities due to inflation.

On July 4, the Union of Polish Teachers demanded from the authorities an immediate increase in teachers’ salaries, otherwise a protest action would be organized.

In 2019, Poland already faced a similar problem. Then the Polish teachers also announced the start of an indefinite strike until the government decides to raise wages. The teachers demanded an increase in wages by 1,000 zlotys per month (about $263).