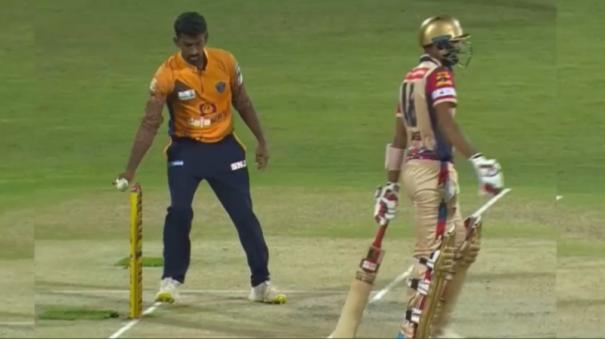 Sepp்l சூப்பர் Super Gillies’ Narayan Jagadeesan loses his wicket to Mankat in the DNPL Series. He was making obscene gestures in frustration of losing the wicket. Now he regrets his action.

The current DNPL series started yesterday. The first match was played between defending champions Sepang Super Gillies and Nellie Royal Kings. Sepp்l வென்ற won the toss and elected to field. Batting first, Nellai scored 184 for 4 in 20 overs. Sepp்l chased down the target with 185 runs to spare.

Captain Kaushik Gandhi and Narayan Jagadeesan were the opening batsmen for the team. Nellai captain Baba Aparajith bowled the fourth over. Jagadeesan, who was on the non-striker end before moving the fourth ball of the over, had moved out of Greece. Aparajith noticed it and ran him out in Mankat mode. He then returned to the pavilion in frustration as he gestured obscenely towards the team that threw the ball.

It has come under heavy criticism in cricket, hailed as the game of gentlemen. Jagadeesan has now apologized for the situation. He said this on the social media page.

“I apologize to everyone for behaving so badly in yesterday’s match. I live for the game of cricket. I respect the sportsmanship of this game. That’s why I could not digest what I did.

Passion is very important in sports. But it is important to control it and move forward in the right direction. In it I embrace failure. There is no apology for what I did. With regret, Jagadeesan, “he said.

What does the rule say? The Marylebone Cricket Club (MCC) announced last March that the controversial ‘Mankat Out’ would no longer be officially considered a run-out. Batsmen bowlers at the non-striker end should not leave Greece while bowling. If so, you can ‘Monk Out’. Although this rule already exists in cricket, many cricket celebrities did not make it out this way as it would not be the right practice.

It was controversial when Indian cricketer Aswin dismissed Butler in this manner in the IPL series. Following this, the MCC has now approved the ‘Mankat’ system as an official run out. It will come into effect from October 1.

What more interesting moments are waiting!