Today, the coalition presents evidence of Hezbollah’s use of Sanaa airport to target Saudi Arabia 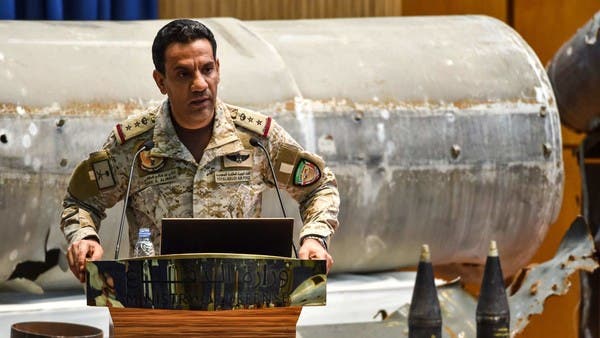 The Coalition to Support Legitimacy in Yemen will present this Sunday afternoon a comprehensive briefing on the Yemeni crisis, including evidence proving the involvement of the Lebanese terrorist Hezbollah in Yemen and the use of the airport to target Saudi Arabia.

Special sources told Al Arabiya that the coalition will present evidence showing the coalition’s penetration of the Houthi leadership pyramid.

The coalition announced, earlier, that the official spokesman, Brigadier General Turki Al-Maliki, will provide a comprehensive briefing on the Yemeni crisis on Sunday at four o’clock Saudi time, where evidence of transforming Sanaa Airport as a center for launching ballistic missiles and drones will be presented.

The statement indicated that the coalition will present evidence of the involvement of the Lebanese terrorist Hezbollah in Yemen and the use of Sanaa airport to target Saudi Arabia.

This comes as the United States, France, and Arab and Gulf countries condemned the terrorist attack on the Samtah Governorate in the Jazan region of Saudi Arabia, which resulted in the death and injury of a number of Saudis and residents of the Kingdom as a result of the fall of a military projectile launched by the Houthi militia.

Yesterday, Saturday, the US embassy in the Saudi capital, Riyadh, expressed its condemnation of the Houthi terrorist militia’s attack on the Jazan region with a military projectile, which resulted in the death of a Saudi and a Yemeni resident, and the injury of seven others, according to the Saudi Civil Defense, in addition to material losses.

The US embassy confirmed that the escalation of the Iranian-backed militia prolongs the conflict and the suffering of innocent civilians, and puts the Saudi people and more than 70,000 Americans residing in the Kingdom at risk, and called on the criminal militia to stop its reckless attacks on Saudi Arabia and engage in diplomatic efforts to end the conflict.