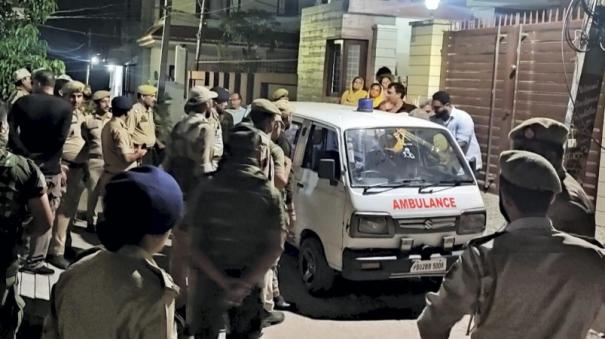 Jammu: Jammu and Kashmir Prisons Director Hemant Lohia has been found murdered by his housekeeper.

Hemant Lohia is a 1992 batch IPS officer from Assam. The 57-year-old was promoted and posted as director of prisons in Jammu and Kashmir last August. In this situation, he was found dead in his house in Udayawala, Jammu last Monday with his throat cut mysteriously.

In this regard, Additional Director of Police Mukesh Singh said, “The body of the Director of Jammu and Kashmir Jail was found under mysterious circumstances. Preliminary investigations suggest that he may have been murdered. The domestic servant of the police officer is absconding. The search for him has started. “Senior officials are also at the spot. Investigation into the nexus of the crime has started. Jammu and Kashmir Police deeply mourns the demise of senior officer Hemant Lohia,” he said.

Police suspect Yasir Ahmed, who worked at Lohia’s house, may have committed the murder. He is murdered by strangling Logia and then slitting his throat with a broken ketchup bottle. An attempt was also made to cremate Logia’s body.

“The alleged killer, 23-year-old Yasir Ahmed, had joined Hemant Lohia’s house only six months ago. Yasir’s actions have been brutal. CCTV footage of Yasir running away after the crime has been obtained,” said Additional Director of Police Mukesh Singh.

Director of Police Dilpak Singh said, “Hemant Logia was staying at his friend Sanjeev Khajuria’s house in Udaiwala as maintenance work was going on at his house. He went to bed after dinner on Monday. His leg was injured and his housekeeper Yasir had given him medicine. Then the door of the room was closed. “Yasir attacked Logia with a pointed weapon and tried to set him on fire. Seeing the fire, other policemen broke the door and tried to save him, but he lost his life. A police force has gone to Ramban, 120 km from Jammu, to nab Yasir. Investigation is on,” he said.

In this situation, the police arrested Yasir Ahmed on Tuesday in a search and hunt that went on throughout the night.

“The accused person has been arrested as a result of night-long search by the Jammu and Kashmir Police. He is being interrogated,” said the Additional Director of Police.

DGP Dilpak Singh said, “It is unfortunate that a servant of the house has acted like this. Evidence has been found that Yasir was mentally disturbed and of a violent nature. Further investigation into the crime is on.”

When asked by reporters about a terrorist group’s claim of responsibility for the murder, he said, “It is normal for such organizations to shamelessly claim all things. We have no evidence for that at this time. So we are not accepting it now. However, it will also be investigated.”

Earlier, an unknown group claimed responsibility for the murder of the director of prisons in Jammu and Kashmir. The group, which calls itself People’s Anti-Fascist Front (PAFF), said in a note circulated on social media, “The killing of Lohia was carried out by a special force of their group. He is a high target. This is a testimony that we can kill those who help the Hindutva regime anytime, anywhere. “The killing of the top official is just the beginning. This is our gift to Home Minister Amit Shah who has arrived in Kashmir amid tight security. Our action will continue,” he said.