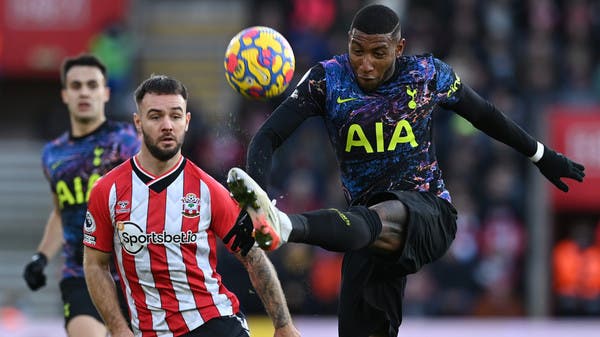 Tottenham fell to a 1-1 draw against its host Southampton during the match that brought them together on Tuesday in the 20th round of the English Premier League, which also saw Crystal Palace beat Norwich City 3-0 and West Ham beat Watford 4-1.

Southampton’s Mohamed Salisu was sent off in the 39th minute.

In the second match, Crystal Palace beat Norwich City with three clean goals, scored by Odusson Edward in the eighth minute from a penalty kick, John Philip Mateta in the 38th minute and Jeffrey Schlub in the 42nd minute.

Crystal Palace raised its score to 23 points in ninth place, and Norwich City’s balance stopped at ten points in the last twentieth place.

West Ham’s goals were scored by Thomas Sosic in the 24th minute, Said Benrahma in the 29th minute, Mark Noble in the 58th minute from a penalty kick and Nikola Vlasic in the second minute of stoppage time for the match, while Watford’s goal was scored by Emmanuel Dennis in the fourth minute.

West Ham raised its score to 31 points in fourth place, and Watford’s balance stopped at 13 points in 17th place.