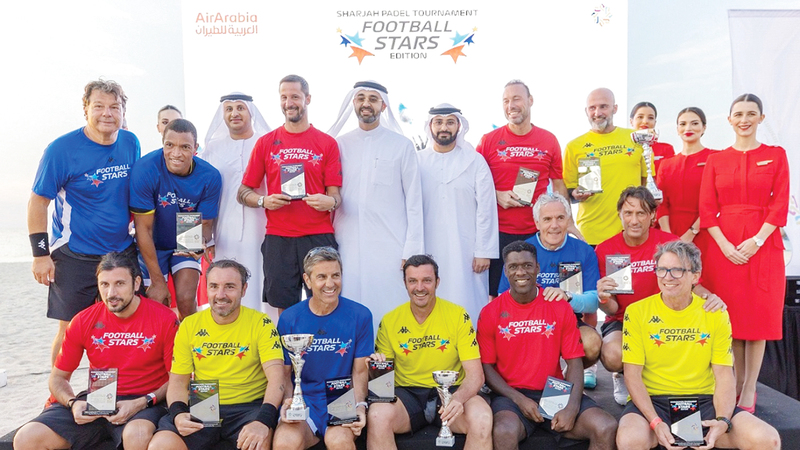 The duo, Italian star Francesco Totti, and former Roma star Enrico Annoni, won first place in the Sharjah Exchange Championship, in the “Football Stars” version, organized by the Sharjah Commerce and Tourism Development Authority, in cooperation with “Air Arabia”, on the sidelines of the “Sharjah International Futbol Championship”. Golf »on the 13th and 14th of this month.

The Italian duo won the championship title after winning the final match against the duo Nelson de Jesus Silva, known as “Dida” and Alessandro Costacurta, who won the title of runner-up, while Massimo Udo and Christian Brocchi finished third, after winning a confrontation with Clarence Seedorf and Dario Marcolin. .

The Chairman of the Sharjah Commerce and Tourism Development Authority, Khaled Al Midfa, and the Acting Executive Director of the Sharjah Investment and Development Authority (Shurooq) Ahmed Al-Qaseer, handed over the championship cups and medals to the winners, at the Sheraton Sharjah Resort & Spa, where it hosted 16 international players from former football stars, in a promotional initiative to highlight They shed light on the distinctive tourist destinations in the emirate during their stay in Sharjah during the tournament, in a way that enhances the status of sports tourism and contributes to building bridges of cultural exchange and civilized dialogue through sporting events.

The closing round of the tournament witnessed a friendly match that brought together the former Roma legend, Italian Francesco Totti, and the former Barcelona and Juventus star and the current Sharjah club, Miralem Pjanic.

Kalba wins the U-15 Cubs League title (B)